I stumbled on the Norse idea of a fylgja while I was mucking about on wikipedia to write this story. The idea of a beast that accompanies each of us, a symbol of our fortune, as we make our way through our life appealed to me somehow. I’ve been known to give people animal names. I’ve had a kitten for mine as far back as I can remember.
Eventually I stumbled on Odin’s fylgja, the two ravens, Huginn and Muninn, thought and memory. He sends them every day across Midgard to bring him news of it. And each day he worries that they will not return.

For Hugin I fear lest he come not home,
But for Munin my care is more.
I was amused. Today we know that crows/corvids are indeed quite clever and capable of both thought and memory. They have earned their legendary titles. They can do an awful lot of clever stuff. They can figure out how to complete a task using a series of tools in ways that require them to reason. They cache and store food away, and then recover it, They modify their caching behaviour depending on whether or not another crow watches them showing they can infer about the state of knowledge of another creature, something human children learn only after four years or so.
Huginn and Muninn, thought and memory, then became my next word beast project. The ravens are made from the science that investigates their cognitive abilities, their ability to think thoughts and make memories. 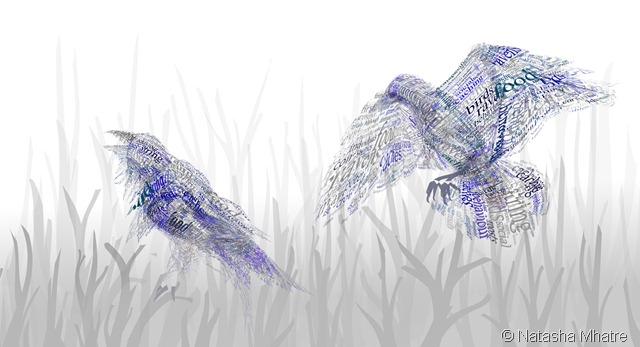 The law of return: word beasts 4

I had to pick the next beast in my bestiary. I checked up on my obsessions and tried to find the one that hadn’t been satisfied enough. I found one: mantises. I never really managed what I thought was a satisfactory photo of a mantis. I made one that is truly not bad, but even that one wasn’t perfect. And so a mantis it would be.
The words in the wordle were based on research on how they catch their prey. About their ability to judge depth using what is essentially parallax…So I made one and here is the first one. 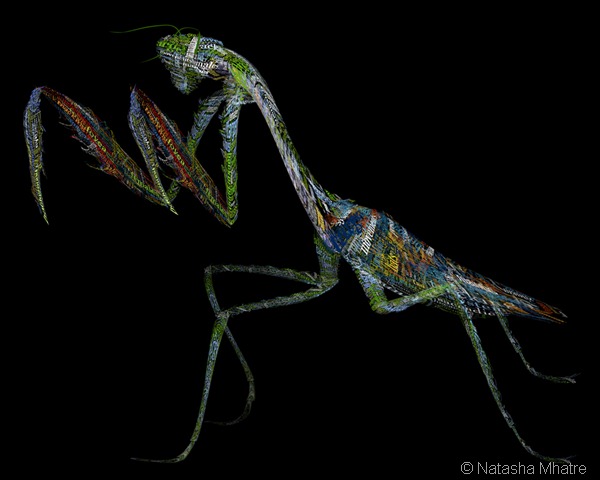 I’ve shown it to a lot of people and a lot of them love it. Yet I simply wasn’t happy with it. There were parts of it I liked, the arms and the spikes were a simple new innovation I made just for this word beast. The eyes were cleverly made with the same method.
Yet the whole thing didn’t really hang together for me. It didn’t really have the sense of 3D depth which the ecology picture did. There was nothing interesting going on like the interplay in the ecology image, or the courtship with the snakes, or even the simple Escher idea in the ant. That little extra bit of edge was missing. Which it really shouldn’t be in any image that needs to stand on its own rights. Especially with an animal quite as dynamic as a mantis. So I went back and started again.
It is really easier with a photograph, you go back and take the image again, if circumstances cooperate. With making something as complex as this, with a million different small moves that you make to achieve the whole; something which takes ages. It was a bit hard to fight the inertia to start again. But as you might know by now, I return. So I did and it was worth it. 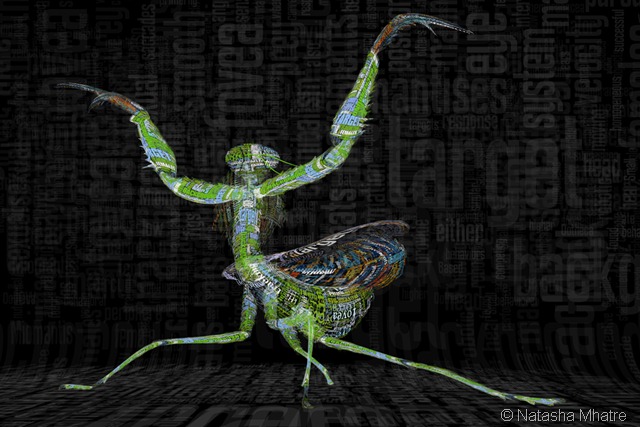 For those of you that want to make images with words but haven’t the patience for something this work intensive, there might be hope yet. I stumbled on this website, tagxedo: it will allow you to make 2D word images. I haven’t played with it nearly enough. I’m sure you will! Have fun!
(PS as always, on redbubble should you want it)
5 comments: