Even after I finished the CES brochure, I still itched to make more word beasts. It seemed like they had potential (You can tell me if you think otherwise, I’ll really be happy to hear!). I wondered what I could do with them. I thought of one place I simply had to use them.
To tell you what that was about, I have to take a bit of an detour. Many years ago, when one of my little cousins was indeed little, in a creative fit I wrote a short story for him. About snakes. He was fascinated by my, shall we say, involvement with them. So I wrote a short story for him and promptly forgot it existed. It never reached him and probably never will since he’s grown up now and isn’t very fond of reading. The odd thing is, I don’t actually remember writing this story and I’m usually quite good at remembering my creative moments. Ask me about almost any of my photographs and I will remember the specific circumstances that surround it. Maybe, its just a sort of curious photographic memory about photographs…
Anyway, several years later, I found this story on my computer and reread it and liked it. It was okay, it didn’t make me want to puke. And I thought, hey, there’s the root of something here. The story was a sci-fi short and about snakes, specifically about the fact that they moult (This one). And I figured, maybe I could write a series, each in a different genre, each highlighting a different aspect of snake biology. As it stands there are four and a half. (I’m struggling with the half because I picked a particularly hard genre to write it in. Its interesting so far, and I love it, at least the process. Despite the fact that I actually hate writing, go figure.) All these and a few more will end up in a book of a sort. I have some ideas on how it all structures together and I’m excited about it.
This book, I figured, will need a cover. And that is where the word beasts came in. Beasts made of the words that make them up. The words of the stories that make snakes come alive (hopefully) in your head, make the snakes in my images. Here are those beasts, courting, hopefully to mate and produce more words and beasts. 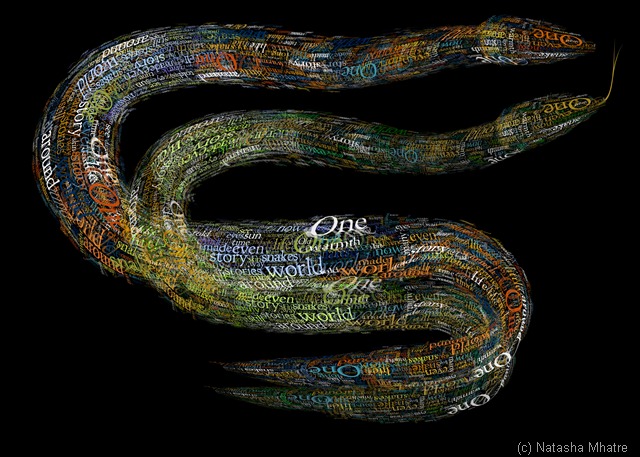 PS: Also would anyone like prints? Know of a good print on demand site, one where I can submit an image and they mail you the prints? Particularly one that works for an Indian audience? I am on RedBubble. If enough people are interested I’ll put a few images up there.
Comment, tell me what you think!
No comments:

Where did it all begin? A year ago, now. It began with too many words and not enough images. It began when I agreed to make a brochure for CES for its silver jubilee celebrations. I had a lot of text, a lot and very few images. And somehow an appealing document had to be woven from this. There was the cover to be made. What do you put on the cover of a document that is to be made for a whole department? That represents what everyone does, that keeps everyone happy.
The department’s logo a long time ago was designed with a Racket tailed drongo in it. It’s rarely used, but there was an idea someone had suggested. Now I didn’t have an image of this bird. And really I am not going to swipe something of the net. But there were these images, they were hauntingly beautiful. Haunting in the niggling way like sand in your shoes. I wasn’t going to nick them, and I didn’t think we could organise to pay. So I set it aside.
Then I thought I would use the words somehow, the words to make the artwork. That was the first good idea I think. When I was younger, I used to think that somehow looking at other art would influence me, and make my work derivative. I’ve given that up now, I’m of the Wharton school now. So I looked up what others had been doing. A lot of it then was stuff like this. So well, I thought, I sure as hell am not going to do anything that requires me to do paste each word in to a template. So I thought, maybe I could reshape a sheet of words.
That’s where it got interesting. I remembered tag clouds. And I dug around and found Wordle. I took the text from the brochure and plugged it in. Made lots of different shaped, coloured and fonted word clouds. Now what? Well, import them into Photoshop. Start to reshape them. How, well, see what you can use. You don’t want to cut words out, that’s clumsy. What you want is to shape them. And then I started a few simple techniques which gave me the results I wanted. Which will be obvious if you look at these images. This which may be familiar to IIScians and ended up on the poster was among the first products that satisfied me: 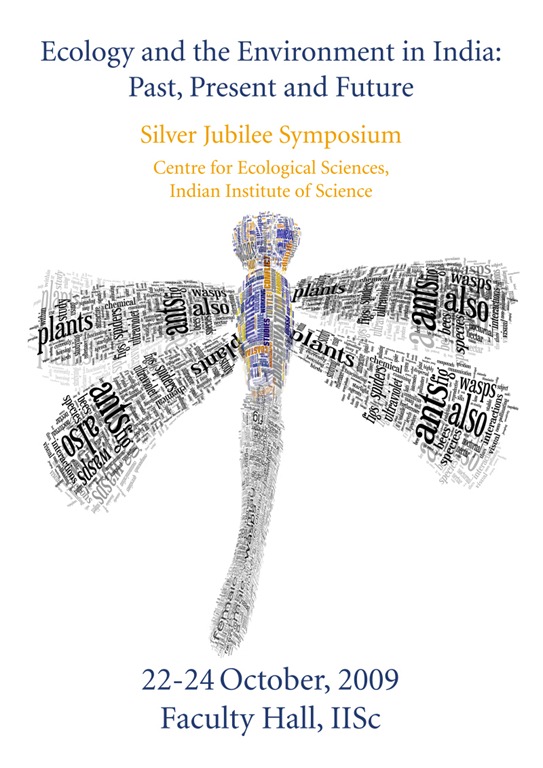 And there it was, the start of the word beasts. CES got its brochure and I love what I did for them. Here is what CES got, the front on the right, back on the left, think of it as wrapping around the book. I quite like it. It has everyone’s work right up there in front, it depicts the work in a sort of way as well, the ecology of it all. So I think, that went well finally and the drongo did find its way back, so, no more haunting. 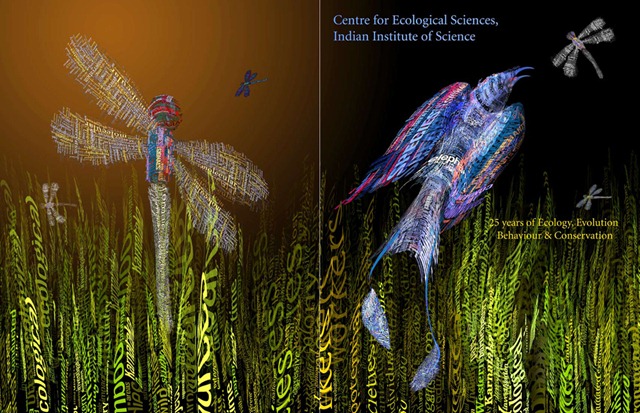 But that was not and will not be the last of the word beasts. There are several more in the works, (slow and painstaking work unfortunately). Coming soon…
5 comments:

We had good light for one day, so most of the pictures are from that one day. The rest were dry but overcast. Ah well, we concentrated on walking. A lot. C carried my camera a lot, this is getting to be a bad habit. 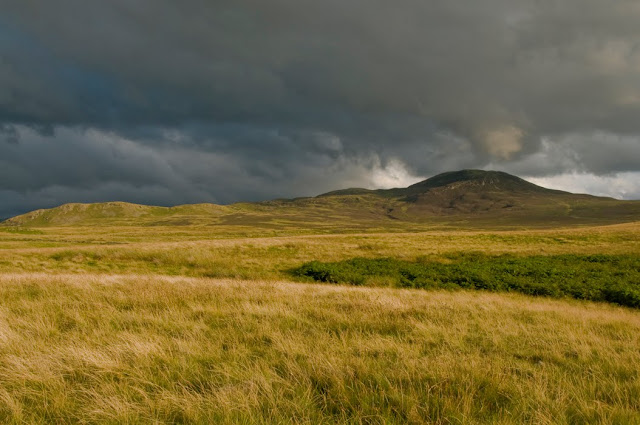 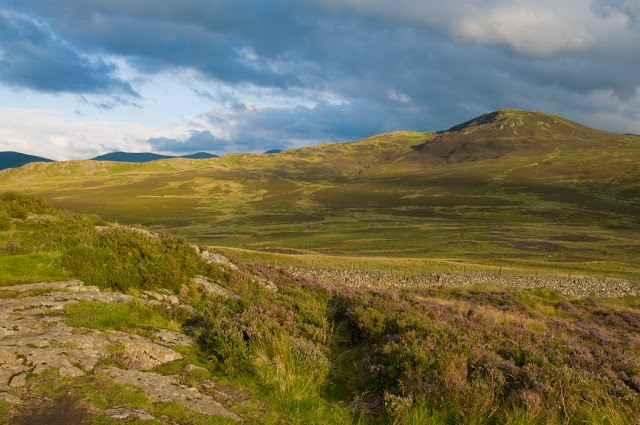 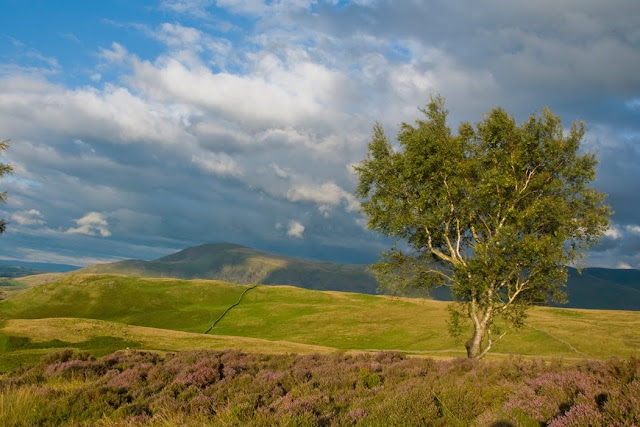 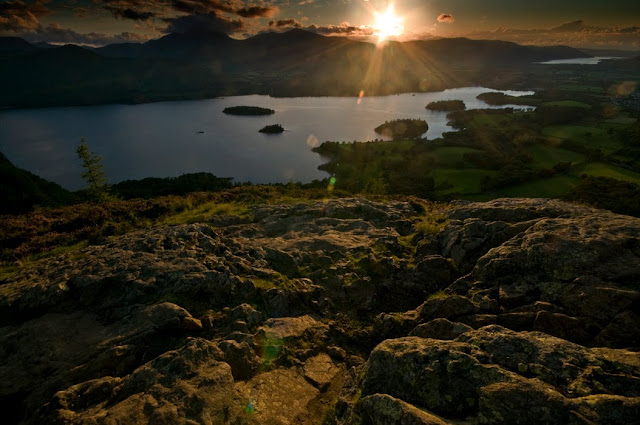 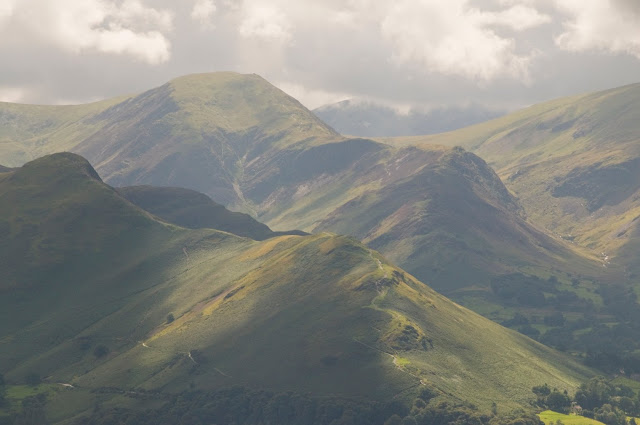 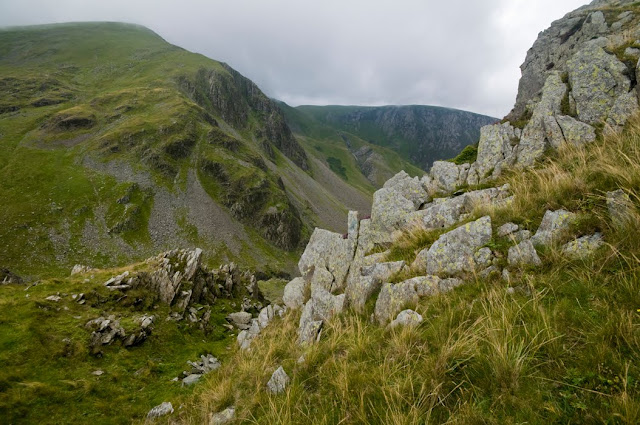