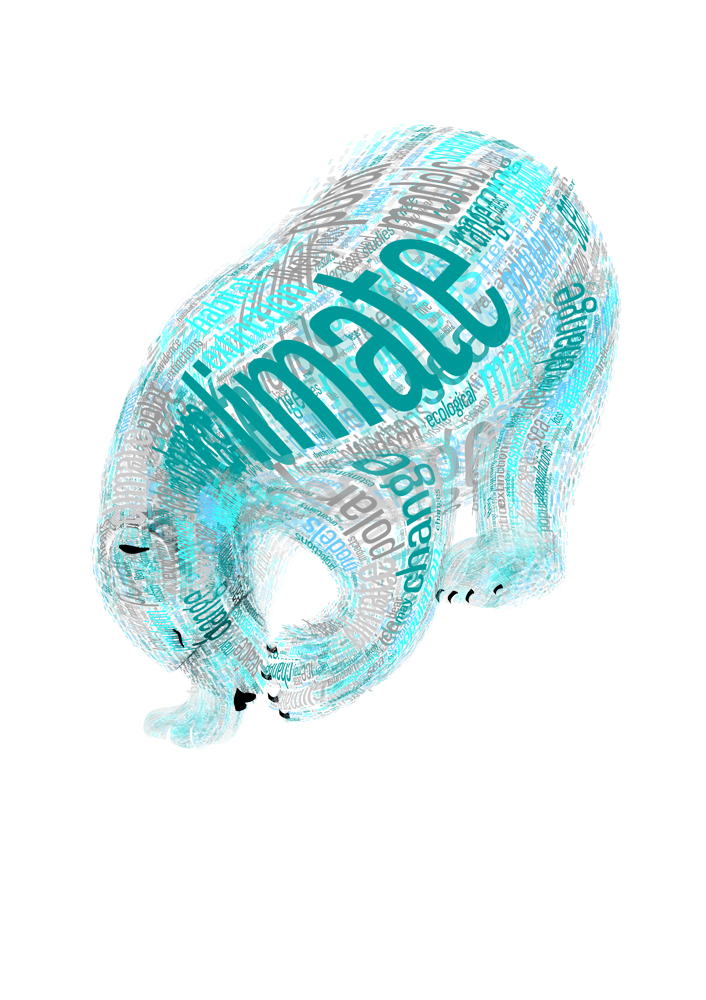 You can probably guess what research this wordle covers...

It does not look like this outside right now. 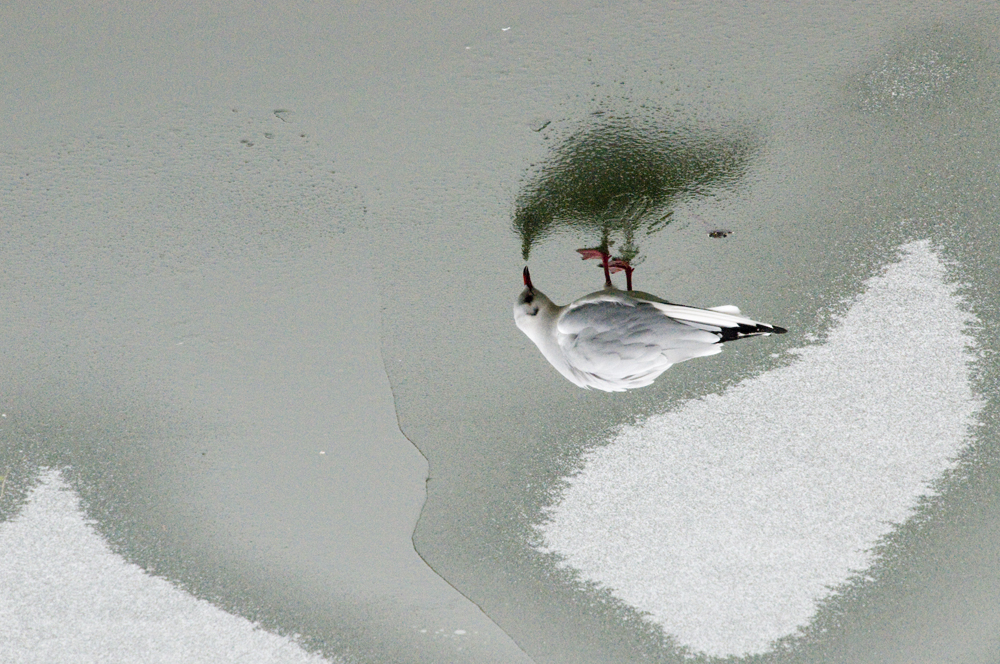 
Copyright © Natasha Mhatre If you're reading this without attribution to me anywhere other than at my blog Talking Pictures, its probably being plagiarized.

We have a guest blogger today. My labmate Dominic Clarke: physicist, biologist, musician, general genius at building stuff and resident bee-man! This is a wordle from a paper Dom was lead author on which showed that bees can perceive electric fields generated by their pollinators. More from Dom himself. 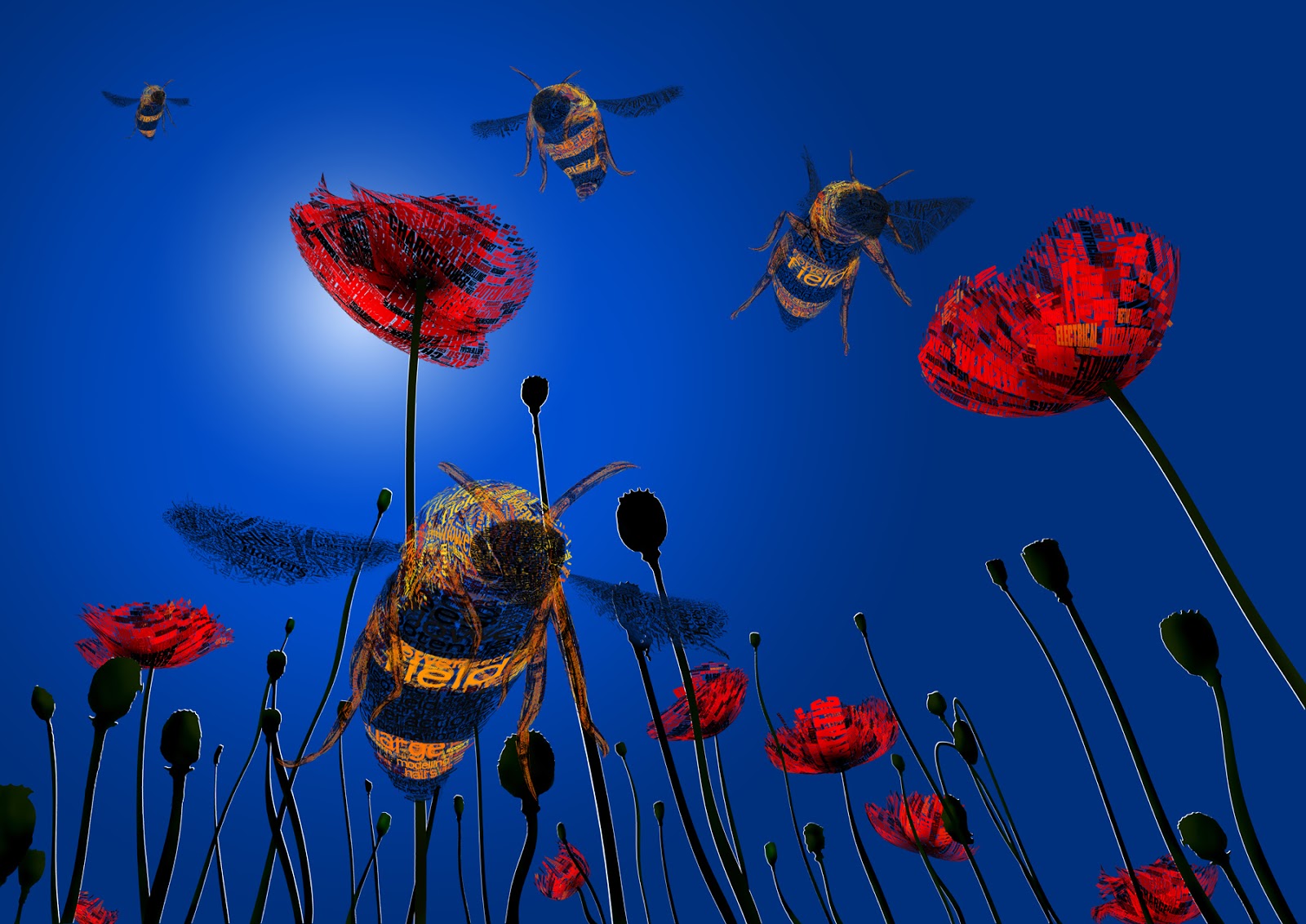 We know that electric fields are used extensively by sharks and rays and other marine animals as methods of detecting and even incapacitating their prey1. The reason this is prevalent in the ocean is that water has a high relative permittivity (a measure of how easily an electric field can be set up in a material). Water has about 80 times higher permittivity than air so the tiny electric potentials created within animals are able to perturb the background electric field over much greater distances in water than the same potentials can in air.

So it may seem that terrestrial animals would not be well served by the electric sensitivity of a shark or a ray. The much longer-range efficacy of other sensory modes available would seem to overwhelm any benefit conferred by an electrostatic sense. But what if those much shorter distances are important to your survival? Bumblebees around a flower-bed are constantly making decisions about which flowers to choose and which flowers to avoid. They, like us, use memory, instinct and knowledge gained from others in making their decisions. A flower of a particular type may have been very rewarding in the past and so warrants future visits. The reward might have simply been a bumper crop of nectar, but it can also be more subtle. The temperature of a flower can be considered a floral reward since less energy is lost when the bee lands and feeds, so less is required to start flying again2.Even the ease of handling and manipulating a flower is a factor in the decisions a bee makes. Easier flowers to handle can be visited more quickly so more flowers can be visited in a shorter period. In short, the worker bee seeks to maximise the efficiency of her foraging trips, returning home with as much food as possible for the least energy expenditure possible. The stakes are higher than simple energetics too. Each time a bee visits a flower, she risks being eaten by crab spiders and other predators3. All these decisions are made in very close proximity to the flowers, of which there could be thousands of individuals, across hundreds of different species in any given area.

Once all this information is processed and a preference for a particular flower is established, it then has to be remembered. This is where the myriad sensory signals produced by flowers come into play. The colour, shape, texture and smell of a flower all act together to produce a distinctive ‘brand’, so that bees can single out flowers of that species easily. The plants’ motives are very similar to those of product advertisers; they want customers to prefer their product, and just as importantly, to keep coming back to their product, if possible, to the exclusion of their competition. Brand recognition and brand loyalty is vital to the reproductive success of the plant, because a flower’s pollen must land on a conspecific or else, from the plant’s point of view, it is wasted.
Previous research has shown that flowers produce electric fields and that the forces involved may even assist the transfer of pollen between flowers and pollinators4. As sensory biologists, we wanted to know if bees could actually perceive the small electric fields around flowers, and if so, could use them to make foraging decisions. To this end, we gave the bees a choice between artificial flowers that were rewarded with sugar, and identical flowers that weren’t.  The only differences between the two kinds of flowers were the electric fields that they produced. We show that bees are able to reliably distinguish between flowers marked with a small electric field (of similar magnitude to natural flowers) and unmarked flowers. Another group of bees were trained to distinguish not just between the presence and absence of electric fields, but between two fields of similar magnitudes but different geometries, such as might be present on two flowers of different species, showing that the bees could learn some of the distinct features of a given electric field and as well as simply sense its presence or absence.

But what use is this information to bees? What information can a bee get from the electric field that it couldn’t already get from sight or smell? To answer this, we go back to the idea of flowers as advertisers. A television advert typically shows the company’s logo (an easily recognisable combination of colour, text and shape), repeats the name of the product in the voice-over and accompanies all this with a short, catchy piece of music. It’s often the same information given multiple times (the name of the product in the logo, jingle and in the VO) so why wouldn’t one of these methods alone be good enough? Because giving the same information across multiple sensory modes is more effective at getting the viewers’ attention, but more importantly, it is more easily remembered and more readily recalled when it is time for the customer to make a choice about which product to buy (to find out why this is the case, and for a nice primer on Signal Detection Theory, see http://www.cns.nyu.edu/~david/handouts/sdt/sdt.html). The bottom line is that extra information is not redundant, it helps to maximise the efficacy of the advertisement, which is of course in the interest of the advertiser.
To show that electric fields, when presented as floral cues, actually confer this benefit to the bees, we performed one further experiment. We asked one group of bees to distinguish between flowers of one hue from those of a similar but slightly different hue. This is a purely visual task which the bees can perform fairly easily. We recorded the amount of visits each bee required to be able to find the rewarded flowers with 80% accuracy (if they were choosing at random, they would average 50% accuracy because half of the flowers are rewarded and half aren’t). A second group of bees were trained with exactly the same stimuli but this time, the group of flowers that had the first hue were presented with an electric field of one particular geometry, and the flowers of the second hue, with another. The bees that had both electric field and colour information to work with reached 80% accuracy significantly faster than the bees that were given hue alone. This shows that the electric field, when paired with another stimulus, actually improves the bees’ ability to learn and to remember which flower provided the best reward. This is beneficial to the bees of course, because being better able to identify a rewarding flower and distinguish it from the others means fewer wasted trips to unrewarding flowers. But it also benefits the plants because it helps their product ‘stand out from the crowd’, improving reproductive success.

This may not be the only benefit of having the ability to sense electric fields. Since bees are also electrically charged, when they alight on flowers, they create measurable changes in the floral electric field. If other bees can perceive these changes, they may be able to use the information to avoid recently visited flowers that are empty of nectar, again saving them precious energy reducing the number of risky floral visits they have to make. It is also in the interest of flowers to be honest in their advertising. Just like us, if bees are suckered in by a misleading advertisement, and not given the promised reward, they are less likely to try that product again in the future. It might therefore be in the interest of the flower to show the bees a kind of ‘no vacancies’ sign for the short time it takes them to produce a little more nectar. It is time-consuming and costly for a flower to radically alter its appearance every time a bee lands only to change it back again when it’s ready to accept pollinators. The bees’ electrical footprints may offer a fast and energy-efficient way for flowers to communicate their nectar status with their pollinators and avoid false-advertising.

The weather also plays an enormous role in the day to day activities of bees. The number of workers sent out of a hive to forage is strongly influenced by factors such as temperature, sunlight, humidity and rainfall.  The background electric field in the atmosphere, which on a fine day is typically around +100-150 V/m (yes, that means 150 volts between your head your feet when you stand outside), is highly variable5. Fluctuations are caused by charged clouds moving overhead can change the electric field at ground level by as much as 200%, with the field easily reaching +/- 1000-1500 V/m in storm conditions. This is well within the magnitudes of the fields we used in our experiments. Since clouds tend to precede precipitation and precipitation is something that bees wish to avoid, being able to tell what kind of clouds are overhead might give bees the advanced warning they would require to get inside before the storms break. A five minute warning may not be of much use to a meteorologist, but it may be all the time a bee needs to find shelter.
The discovery of the electric sense in bumblebees highlights the electric field as a potentially fruitful area of study in sensory biology, especially in small invertebrates. Electric fields may turn out to be more important or at least more interesting to sensory biologists than we had thought.
Dominic Clarke.