I didn't win in this years BBC/NHM Wildlife photographer competition.

I did, however, get 11 images as far as the semis and 1 into the finals. Fortunately, this year, unlike the last, I submitted online so I know exactly which ones did get that far. This will hopefully help with editing in future years. The cool part was the ones that I thought would, did actually get to this stage, and the ones that were sort of padding in my opinion, didn't. So my editing isn't probably that off...

Here's your tour of the successful part of my submission. 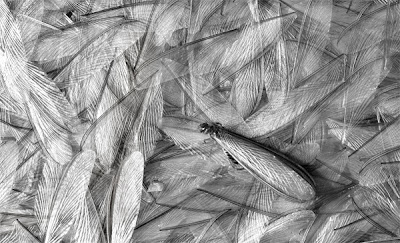 Nature in Black and White:Twisty 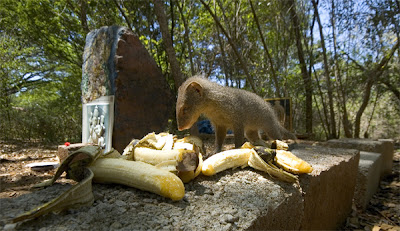 Wild Choice: Touch me not 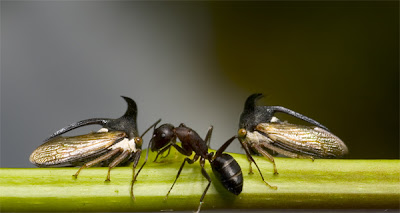 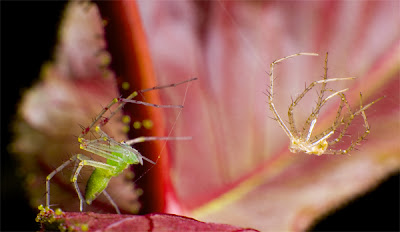 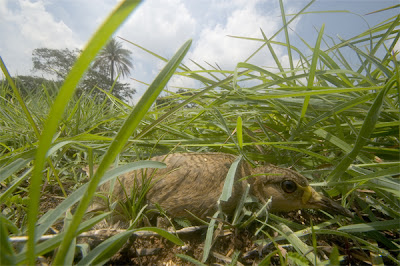 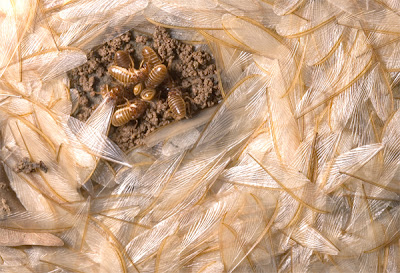 Yup, it's one short...it's the finalist short. That one, only if and when it's a winner. Yes, I'm an awful tease!
8 comments: One of the nice things about posting online is the reach and the variety of people who see your stuff and how they in return contribute to your knowledge. I recently received an email from George Beccaloni from the NHM who works on cockroaches who stumbled upon the parental care in cockroaches picture.

It turns out that someone has actually looked at this behavior carefully before. The work was ironically published in a journal whose offices are a short walk from here, Current Science. Here's what Dr. Beccaloni wrote to me.

"Your photo is of a female cockroach in the genus Thorax or Phoraspis. The amazing thing is that the nymphs feed on the blood of the mother which they obtain by biting small holes in the membranes between the segments of her abdomen. Here is some information taken from this book:

"Phlebonotus pallens Serville, a semi-aquatic species found in India, clearly falls in the latter category. Pruthi (1933) collected a female in south India, not noticing anything extraordinary about the specimen. Upon sorting his catch, however, he found that the roach had about a dozen nymphs under her wings. "The wing covers are opaque and the young ones lying under them are so nicely packed," her commented, "that the human eye cannot easily detect on superficial examination that the individual is carrying so many young ones on its body."
Females of this species are flightless, with the hindwings greatly reduced. The forewings, however, are fully formed and arched to create the nymphal space beneath. Roth (1981) speculated that the arched tegmina found in the related genera Phoraspis and Thorax might suggest similar maternal care in those roaches.
He was proved right: Indian entomologist S. Bhoopathy reported in 1998 that the first two nymphal instars of the epilamprine Thorax porcellana Saussure are carried snugly beneath the domed forewings of their mother. This cryptic species feeds on clumps of dead vegetation trapped by the densely intertwining branches of certain shrubs (e.g., Prosopis spicigera, Gymnosporia montana, and Flacourtia sp.). Females produce a single clutch of about 40 eggs annually. Bhoopathy's 1998 study provides the only detailed observation of actual migration of neonate cockroaches to the dorsal depression under the wings (the cockpit?), and so is worth quoting: "Immediately after hatching, the first instar nymphs...crawled over the abdomen of the mother. The upper surface of her abdomen became markedly depressed into a fairly tight spacious trough or chamber with its sides raised. As the nymphs crawled over her body, she raised up her tegmina, which were large, tough, and dome-shaped, and all the nymphs were accommodated compactly; the tegmina were placed in position so as to conceal all the nymphs and to afford perfect protection." It is further noted that the concave dorsal "trough" in which the nymphs ride essentially forms upon the birth of the nymphs, by retraction of the distended internal brood sac after they vacate (Bhoopathy 1998).
More remarkable still, T. porcellana nymphs were found by Bhoopathy to derive liquid nourishment from specialized dorsal pores in their mother's dorsum as well as by the macabre means of piercing her cuticle with specialized sharp mandibles! The nymphs have relatively long, sharp mandibular tooth-like processes, present only in the first two instars, which penetrate the female's abdominal intersegmental membrane. Hemolymph or some other fluid oozing from the wounds is then imbibed by the young roaches. T. porcellana's specialized neonate feeding adaptations - a larger head relative to the body in the first two instars, and mandibular "teeth" lost in later instars - are not as extreme as those of some roaches (see Perisphaeriinae below), but this trophic interaction is curious indeed. Bhoopathy showed that this is an obligate mode of feeding for neonates, as they soon die if removed from the mother. It is hard to say if some other factor contributed to their decline. I would think, for example, that the neonates would be especially prone to desiccation if removed from the cozy chamber atop the mother. Still, the morphological modifications of both mother and offspring indicate the closeness of their relationship; do the dorsal pores provide "milk" of sorts to the young? And is the milk supplemented by blood (hemolymph)?" "
5 comments:

Magnum and Slate seem to have streamlined their site. Which is good news since you don't want to have to wait too much when looking at what the call the best of their 60 years.

Now is there a LIFE magazine archive somewhere? I found this in which there is this archive of classic prints.
No comments:

John Harrington writes the excellent blog Photo Business News & Forum. He usually has simple and clear advice on how to ensure that you can earn a living as a freelance photographer. Much of his legal advice is US centric, but I think all other stuff applies across the board. Whether it is how to word contracts, deal with clients or protect your own photographic interests.

From his recent list of facts:
"Fact #1: If every time you produce images, the copyright to them is not yours, you will not earn money - any money - from them in the future. "
...
"Fact #6: Just because a client says they won't pay for something, doesn't mean you must accept, and work under, those terms. You have the power to say "no"."

There are some between and after these that are useful reading for those who wish to hit the next level. And as he points out, even if you don't want to go pro and want to continue doing photography on the side, to do it responsibly you should still follow these rules.


As a commenter points out:
"One could say, "In a free market, shouldn't I be free to undercut anyone and compete on price?" Certainly, but in a free market, enlightened self interest makes the whole concert play, and you are really undercutting yourself in doing so. Why is this reality so hard for some to understand?"

Bricks not in a wall 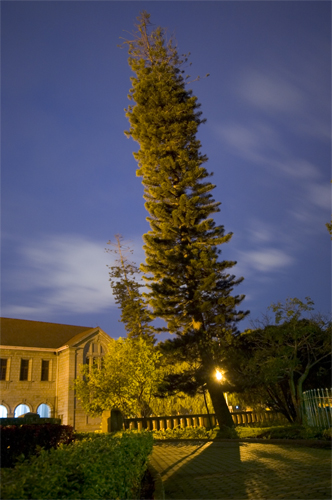 Would you? I'd much rather just write a cheque...if I could that is!

"Call it a grand idea, good enough to beat all laws of appreciation.

The Indian Institute of Science is planning to sell bricks that once formed hostel blocks, for $1,000 (more than Rs 40,000) each. These bricks are not made of gold but of golden memories, the institute says.

The IISc is confident that its old boys, many of whom are now top researchers and scientists in India and abroad, will pay more than that to take home one of the 8,000 bricks up for sale as centenary souvenirs. "

Somehow that phrase 'old boys' catches my eye....Off course it was a boys hostel...and I imagine girls wouldn't want any part of it :)

Email ThisBlogThis!Share to TwitterShare to FacebookShare to Pinterest
Labels: IISc

And thats all we have time for this week 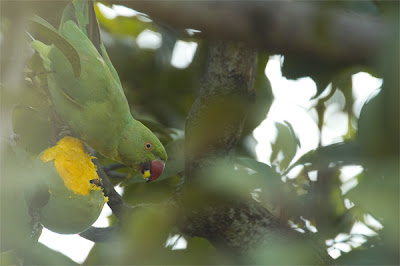 Just one thing before we go, according to the Wikipedia, despite being called parakeets, these are indeed true parrots.

Email ThisBlogThis!Share to TwitterShare to FacebookShare to Pinterest
Labels: image

You'll never have to leave home ever again

This is not what I expect from MS, usually from Google. But heck who cares, it looks very exciting!

Niall Benvie on the state of wildlife photography.

"So, it has come to this: more and more people taking more and more similar pictures of the same, celebrity species and locations ... The real problem with wildlife photography is not that there is too much of it but that photographers – amateur and professional – are failing to reflect natural diversity. Far from inhibiting productivity, wildlife photography needs to be expanded greatly, telling the story of species and locations unknown to readers and viewers."

From A crisis in Nature photography: Niall Benvie

From the Deccan Herald.

For the most part I've found security guards extremely helpful. IISc is huge and well I wander around parts where there is no one within sight or earshot. Many students work late at night and leave when theres no one on the streets.

I've and no I know as ever had anything serious happen to them, mostly verbal abuse, one flashing. I've always thanked my lucky stars that I got to begin shooting in a relatively safe place before I head out into the big bad world (I suppose I'll have to at some point). This does not make me happy at all...
2 comments: