Rhinos come in second only after elephants in the size catergory of land mammals. The average southern white rhinocerous male weighs in anywhere between 1.4 and 3.6 tonnes. On all fours they stand as tall as the tallest guy I ever met, 6ft 8 inches. All very good reasons for why what this animal did should have been impossible. Yet it wasn't. And to be honest elephants do it too, the sneaky b***s.

We didn't see it coming until it had walked halfway into our direct line of sight. A huge male rhinocerous had walked straight to the water, silent as a mouse and he was on our side of the water. He shouldn't have been able to do that.


And he was huge! Two massive magnificent point horns on his forehead, he was quite the specimen. I was thrilled. Since he was so much closer to the massive spots, he reflected back an amazing amount of light and would make amazing images compared to puny beasties across the water. The fourth rhinocerous that night! Was this going to get any better?

He walked up to the edge of the water, non-challantly dipped his head and drank. Drank his fill, unhurried and still, as befit a big regal male. You've met him on the blog before. He's this male. 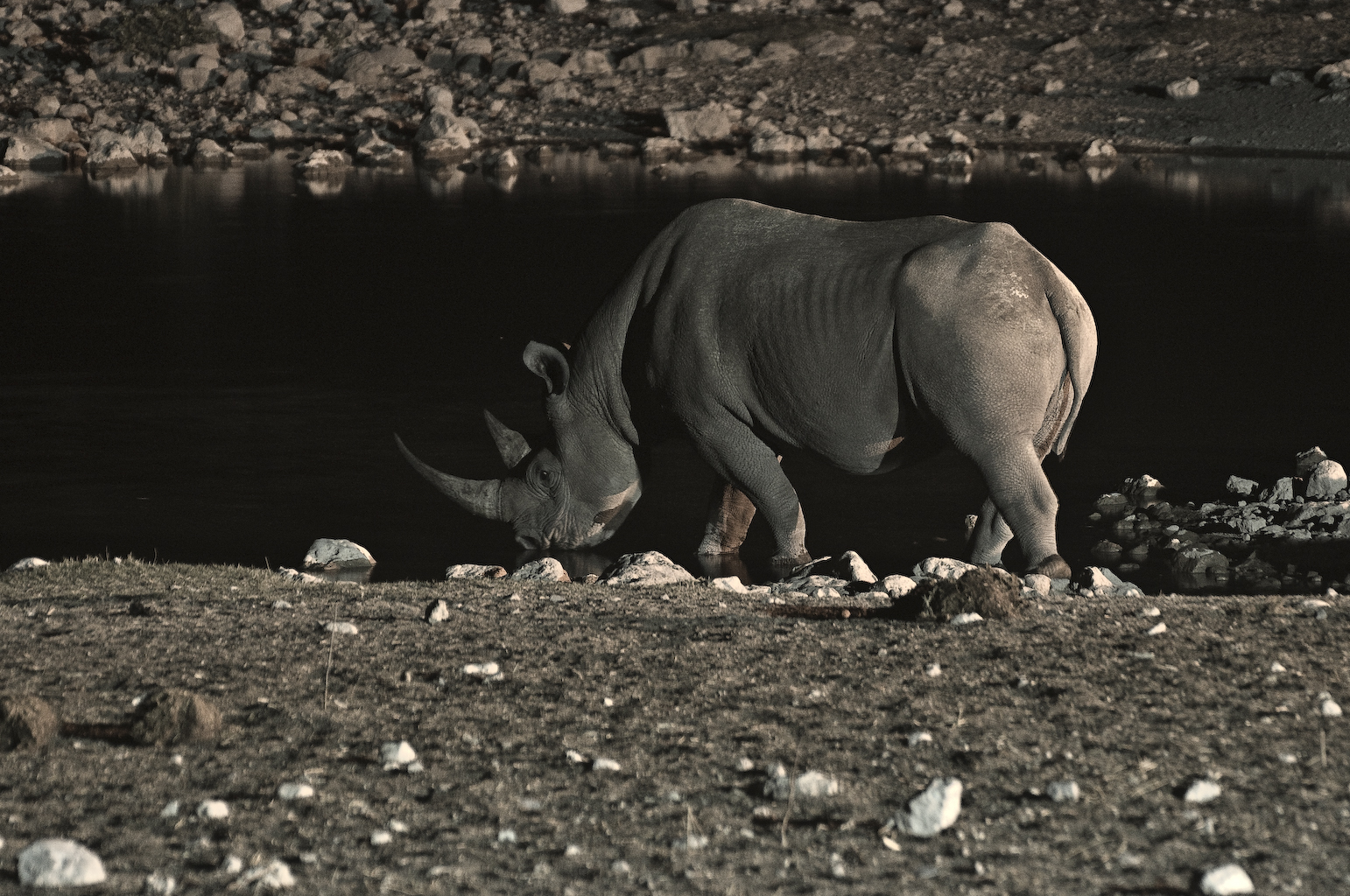 If you haven't had the chance to before, click on that image now, its an image that E P Gee would approve of, every wrinkle sharp as a tack. With this lens, with all its fungus and its haze, at an exposure time of 1 second! I should also add at ISO 1600. There are many miracles that come together to make this single image possible, amazing sensor technology, a very cooperative animal, dumb luck...and perhaps a little preparedness. Technologically at least, this was an impossible image not so long ago.

But back to the animals. As the big male regally drank his fill, on the far shore the female and her calf who had left came back to the waters edge. There were now four at the waterhole. The male got curious and took a direct approach to matters. Instead of walking around to the other side, he decided that the shortest distance was a straight line, even if it got him a bit wet. It was a warm night anyway, a swims always good for you right? 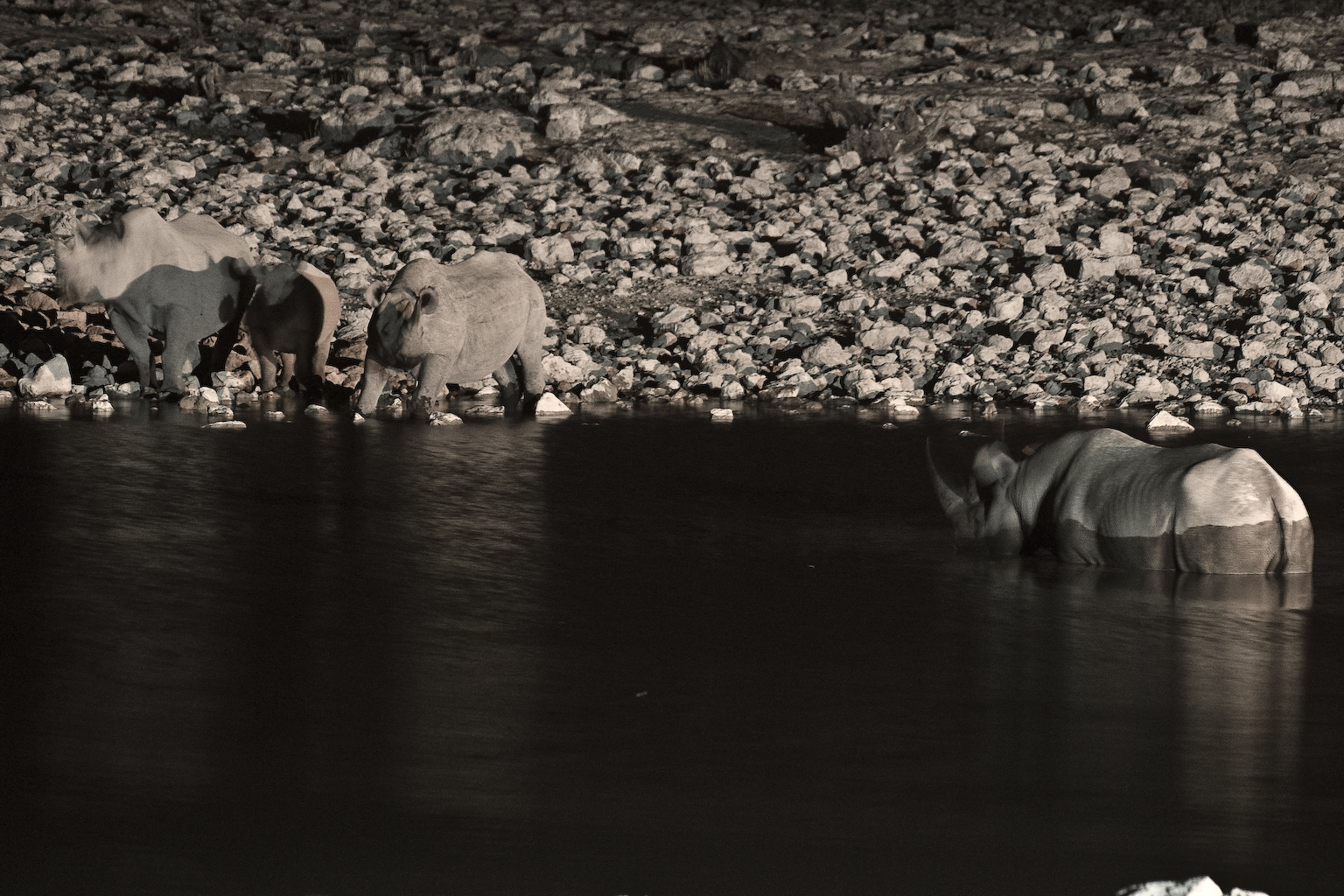 The rhino on the other side, the one we thought was a male, placed himself between the big guy in the water and mommy and her baby. He stood his ground, the hulking form in the water stood his as well. This stand off lasted a while, mommy and baby decided it was a good time to bail and off they went. 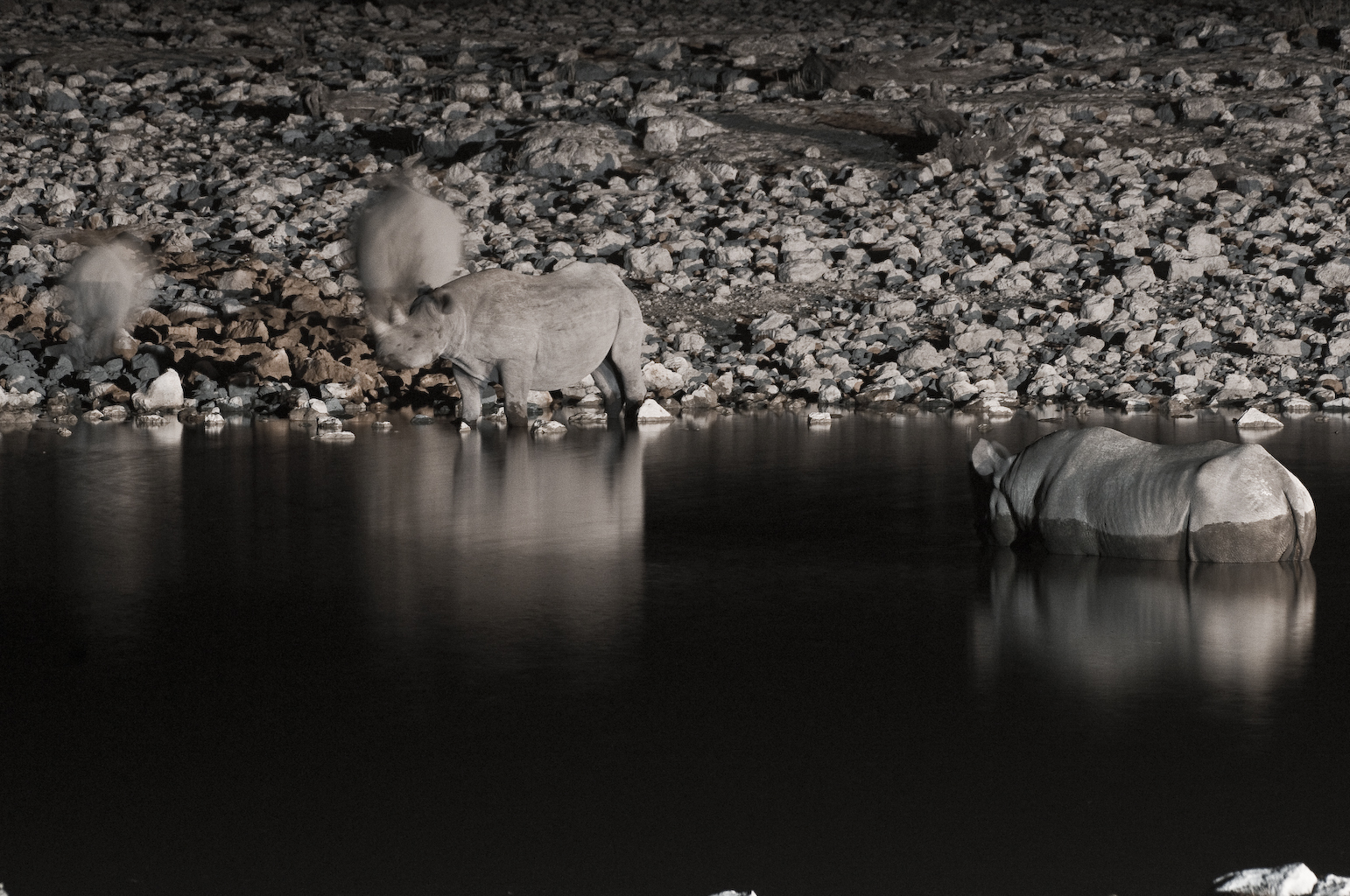 They disappeared off into the darkness and then there were two. The male in the water and the other rather animal on the other shore. They just stood there. We could only wonder, was that animal somehow related to the mother and the calf? Is that why he defended them? And why they were so comfortable with them? Do rhinos carry knowledge of their kin with them like elephants do? Or it occured to me much later, was he mate guarding her as male rhinos do, trying to prevent her from leaving his territory?

I'll relate what happened next and you'll realise that exactly what happened here will remain an unsolved mystery, but you can weigh in with your theories.

The two rhinos stood there. Just for a little while. And then there were three! A rhino appeared again on the far shore. Who this new one was we had no idea! Was it the female that had just left? Did she want to have a chat with the fellow in the water? Could she come back without her calf trailing her? Or was it a completely new fifth rhino we hadn't seen before. The animal looked bigger and more angular at the shoulder blade and so perhaps not the female. Clearly both animals at the water were interested in him. The big guy edged closer to the action but stayed in the water and on the shore the newest one squared up against the first animal. 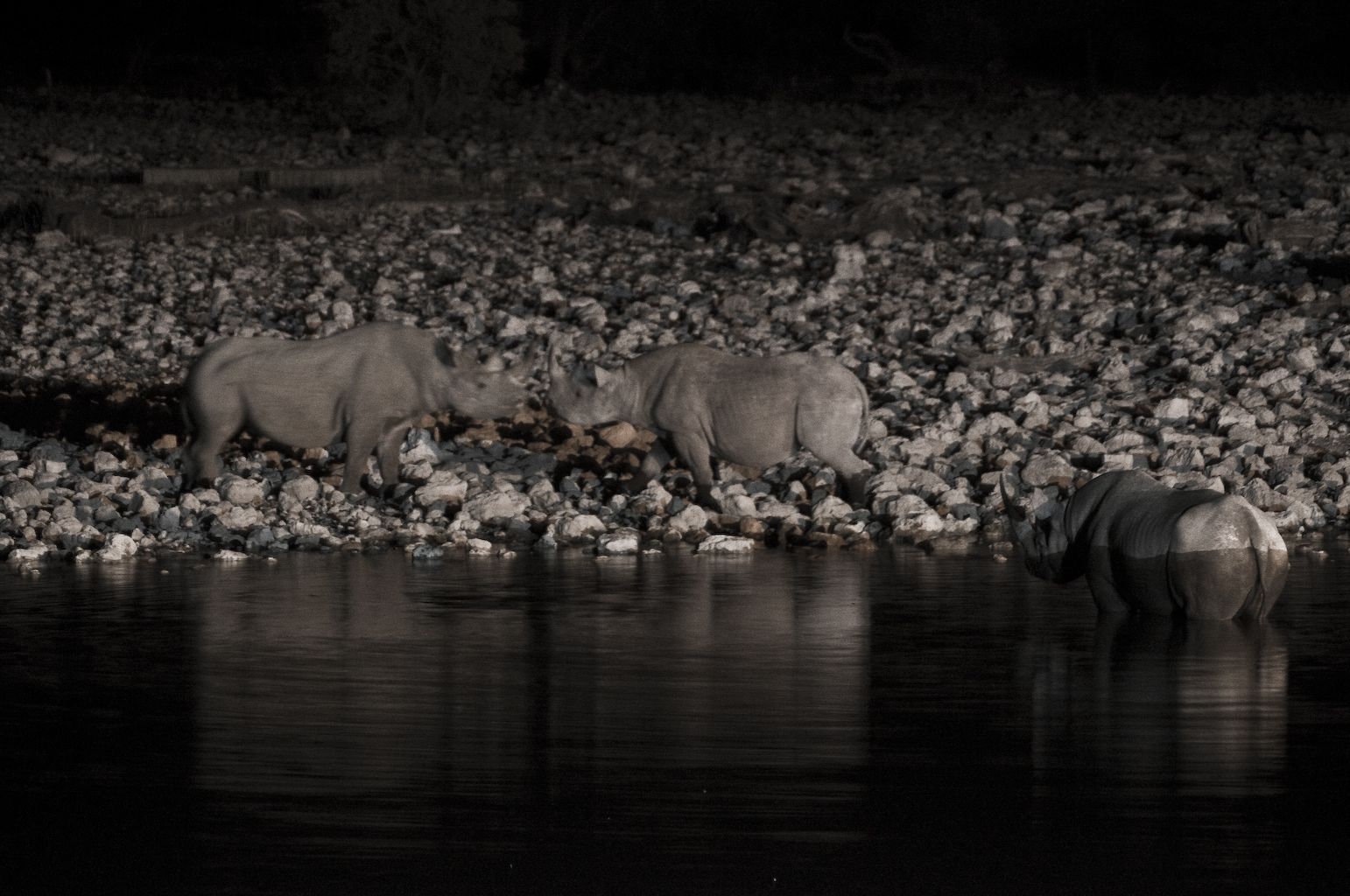 After a brief snuffle, the two stepped back as if for a a run up. 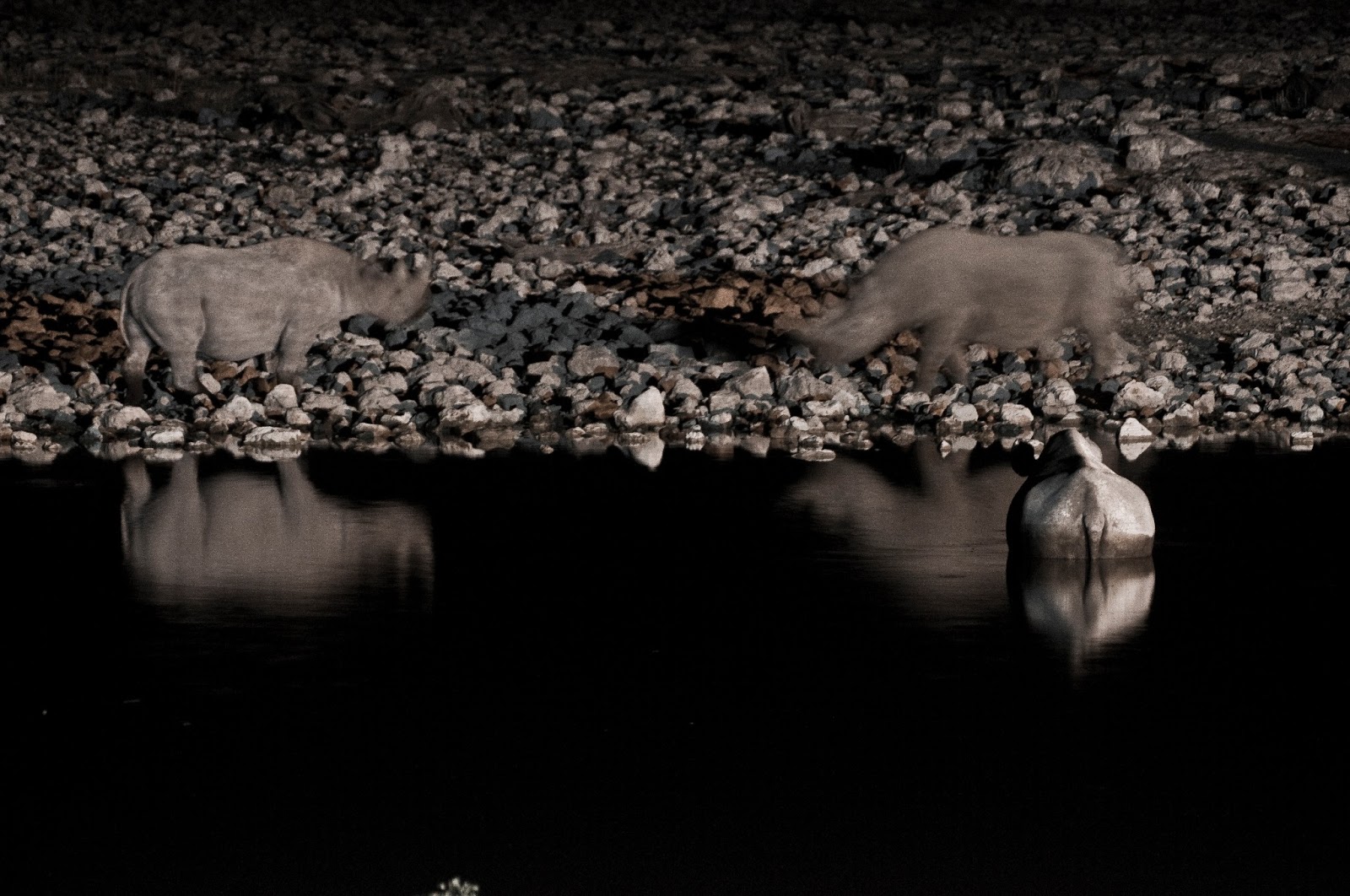 And then they took the run up, grunting loudly breaking the hush around the waterhole and rushed towards each other. They engaged horns, but pulled out just before any real damage happened. Or rather one of them pulled back, the newcomer. 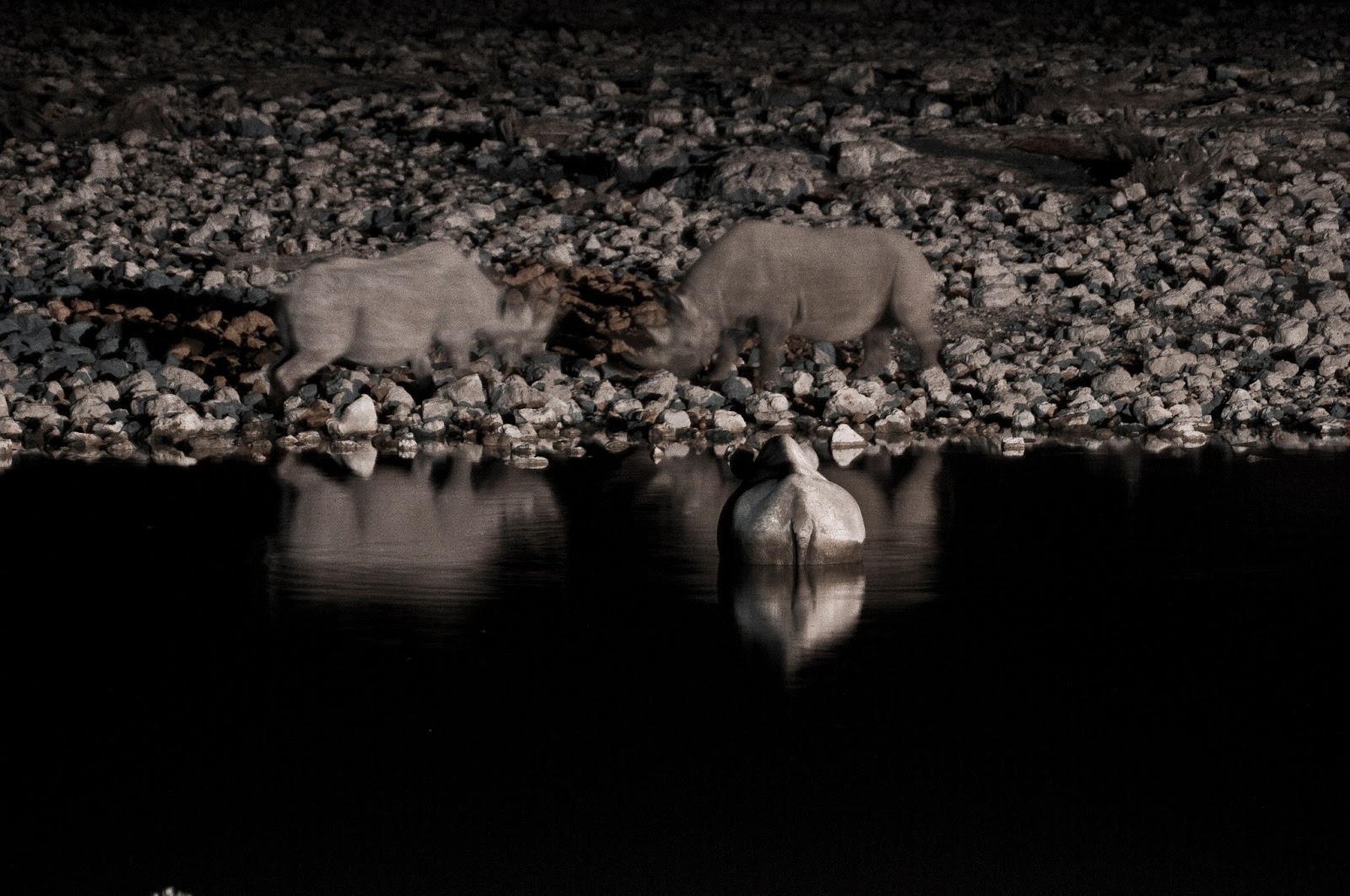 They did this a few times; every single time, the newcomer pulled back. He never did have the bottle. In the meanwhile the male in the water just remained there, constantly readjusting his position to get the best possible view of the proceedings. 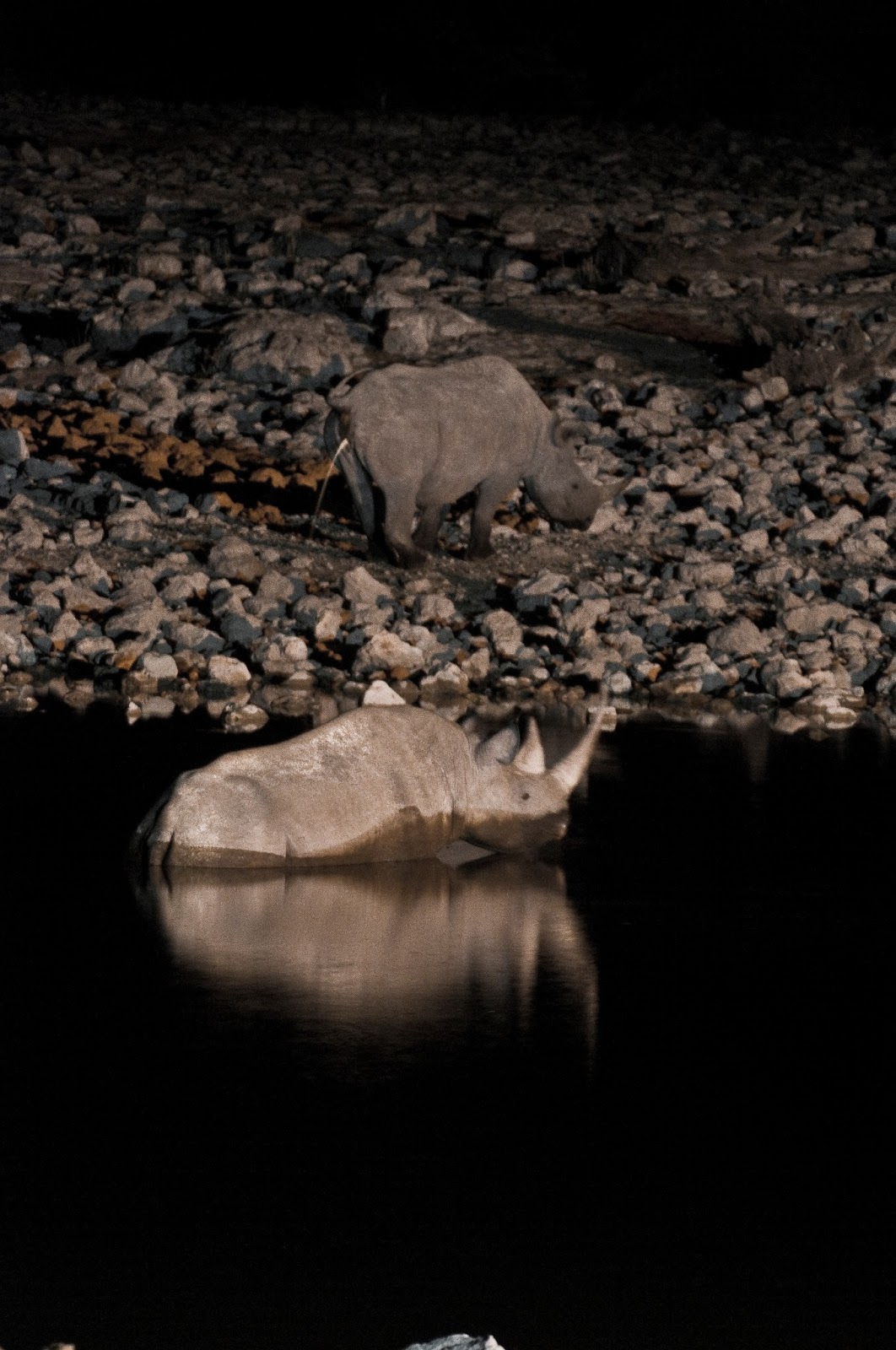 Yet, what would happen now was already eminently clear. The two would square up, charge, grunt, the crowd hold their collective breath and then exhale when the weaker one gave ground. And so it did again and again and again. Until the weakest, latest addition to the waterhole community decided he had had enough. 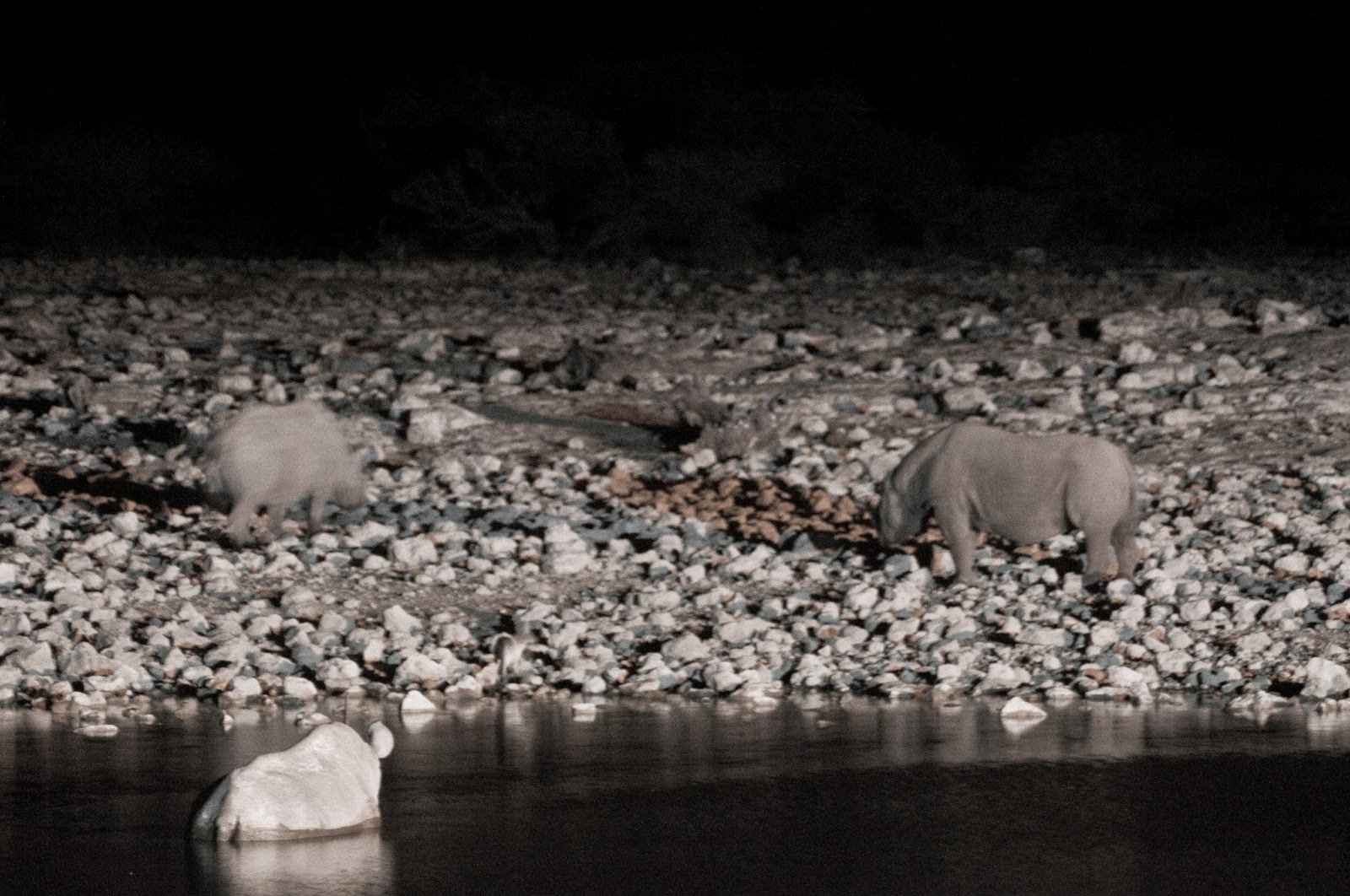 Exit stage left. As is on cue, it started raining, pretty hard. The big bull in the water decided he had enough excitement for the night. He wheeled out of the water and made his very quick move away. Second exit stage left, as silently as he had come. 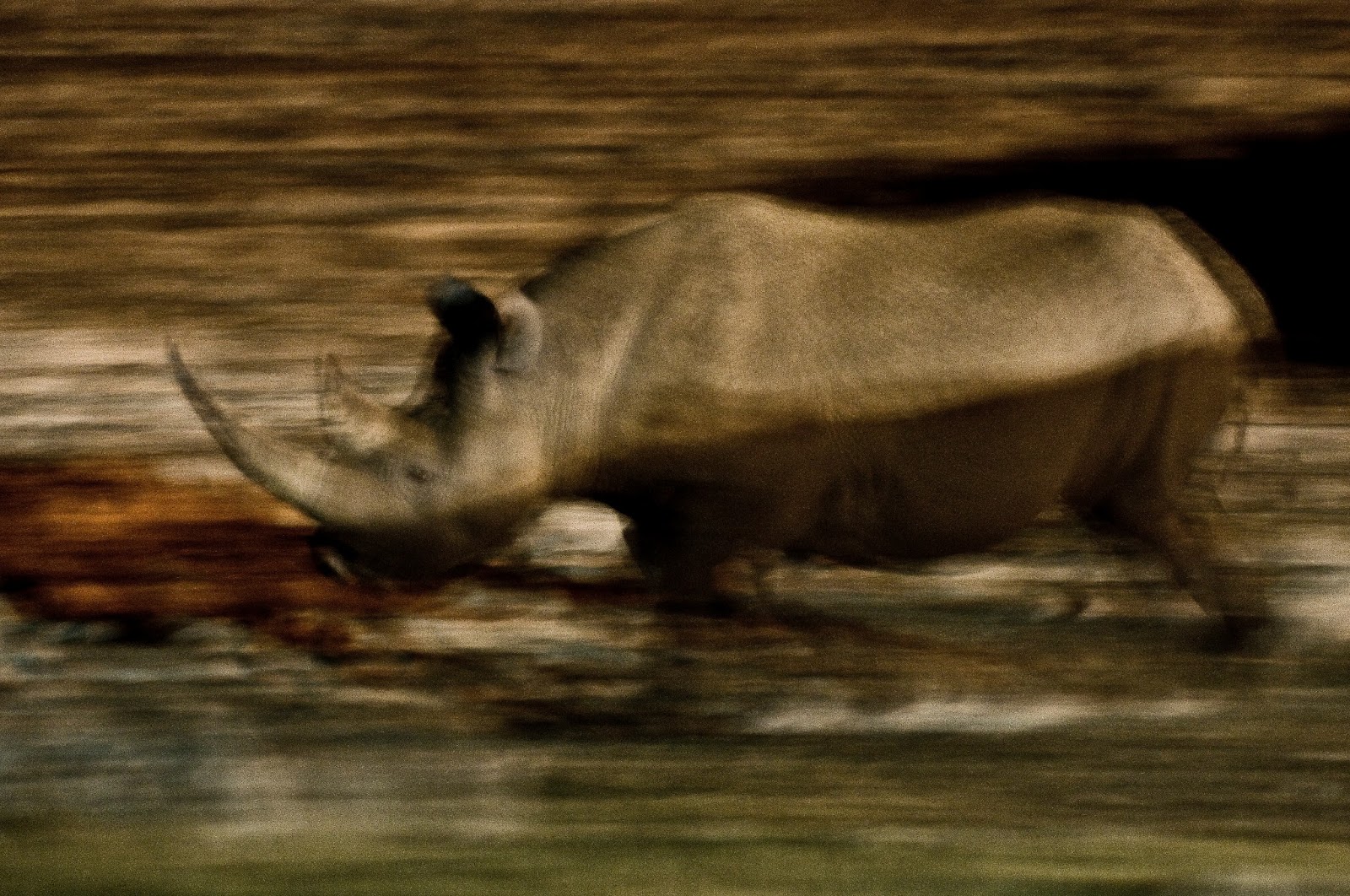 I looked up to see the hub-bub in the crowd and the look on everyones face, as if they could not believe what they had witnessed. The rain was pouring hard now. The man a few benches down started packing his cameras away one by one, a DSLR, another DSLR and a handheld video camera. I couldn't help but think he'd had the right idea for tonight!

The crowd that had waited so long decided it was time for bed. They started streaming away, leaving the lone male at the water's edge without any witness. I wanted to wait it out and tried for a while. The newcomer male did try to come back. The strange seemingly purposeless battle between the two continued for some time, at the very edge of where the floodlight met the darkness beyond. But the park wardens had tired, the magic moment was over; everyone had packed their many cameras away. Away from the wicked wetness that destroyed electronics. The wardens switched off the flood lights and I made my way back to my tent through the packs and packs of Jackals picking at the largesse we'd left behind in the dustbins.

It was a night that had made everything worthwhile. Go to Namibia, go to Etosha, I recommend it highly.