I first came across her work which was used in Nat Geo feature written by Carl Zimmer.

She's been called the doyen of decay. I can see why. She is among other things, a museum photographer, so a lot of the stuff she shoots is dead. When she shot some marine creatures at Woods Hole she actually said that she doesn't see too many alive specimens!

It must be a strange thing to see animals, so inanimate and yet create images that inform their biology. As it were a photographs compress so much. They're a single snapshot, static & they're two dimensional. But I think she does justice to her subjects. She actually manages to add certain degree of dynamism and mystery to her images.

A Wildlife photographer? Maybe, but shes a much more expansive artist than that. She's done many books, exhibitions and collections on things that range from images of extinct animals to dice(!). In another book Owl's head she goes through the keepings of junk dealer in a more modern version of archaelogy to understand us and our recent history through our discardings.

(Just as an aside, here's a sort of related project, a recreation/imagination of what dodo behaviour, ecology might seemed like when they were alive.)

The photograph is copyright Rosamund Purcell, from here.
No comments: 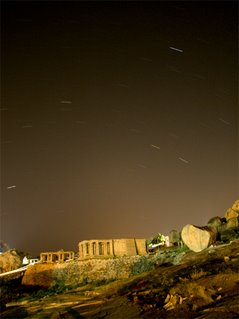 I took a break this weekend and went to Hampi. I shot things that weren't alive! The first is the Kadlekalu Ganesha temple on Hemakuta hill by night. The other the pretty stepped tank. The third shot is the Virupaksha tower at dusk. 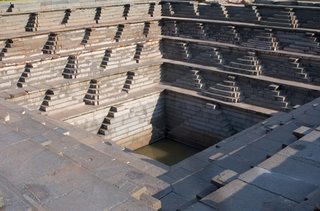 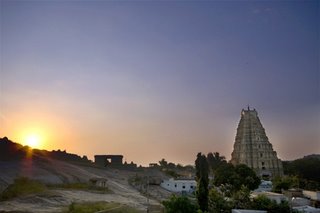 I even shot pictures of human beings. 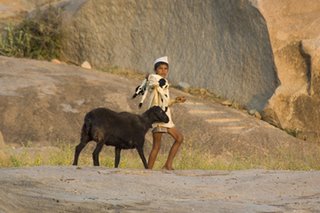 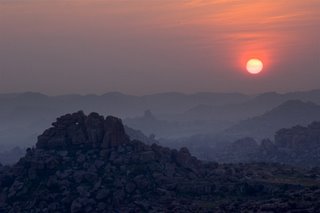 And I even managed to wake up early in the morning!

OK, just for those people who want to go at some point. We got a lot of help from the internets, so heres some in return. We took a train, the Hampi Express to Hospet from Bangalore and were there at 6:10ish in the morning. Walked to Hospet bus stand which is about a 10 mins walk away and got a bus to Hampi almost instantly. When we got to Hampi, we were instantly accosted by folks pushing their lodges. We'd heard of Padmas lodge which is just a minute away, she had a decent room and roof which overlooks Hemakuta hill, so we took it. Theres water all day long, but no hot water. If you want that you have to ask for it. But even in October its hot so you don't really need it. Got a Kinetic for about Rs. 150, took 1.5l of fuel which was too much, about 1l should be enough, unless you're going to drive to the Vithalla temple which is a 12 km drive or a 2 km walk, guess which one we did? If you have the time, consider a cycle, it might be more fun.

Spend a couple of days if possible, the ruins are quite spread out and anything less than 3 days is a rush. We had to. I won't tell you too much about this, there are websites you can look stuff up on and decide what you want to see. Try and catch the sunrise from Matanga hill especially if you love rocky terrain. Its very beautiful and you will feel very virtuous for having gotten up early, at least I did. The climbs interesting and you'll meet the monkeys along the way, who seemed quite harmless to us, so don't worry about them.

Try and eat at least once at the Mango tree restaurant which is by the river. The foods faux European for the firangs and slow-train-coming & for-the-firangs Indian but the locations lovely. Be warned, food in general was slow in coming, its a good practice to ask what'll be quick if you're in a hurry. And when they say 10 mins, it might mean 10 mins to 30 mins!

On the way back we caught a bus out of Hampi at 18:00 and were in Hospet by 18:30, the last one out is at 7:00. Theres a Yatri Niwas on the way to the station which looked decent in which you could eat. We took the Garib Nawaj train at 20:20, which unfortunately runs only on Tuesdays. Unfortunate because it gets to B'lore at a very timely 6:00. The returning Hampi gets here at some ungodly 4 or 5!

PS: the boy says my timings are way off, and add anywhere from 15 mins to 30 mins to all my durations! 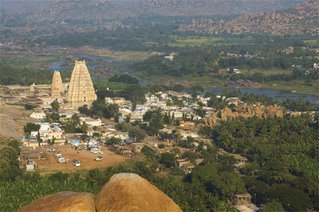 The last picture is of the town, yup, thats all of it!
5 comments:

Email ThisBlogThis!Share to TwitterShare to FacebookShare to Pinterest
Labels: travel

Mosey on over and have a look at the award winners. You can leave a comments as well. I would love to see them at the nhm, tiny images on the website dont really do that much justice to some of the images.
No comments:

Email ThisBlogThis!Share to TwitterShare to FacebookShare to Pinterest
Labels: contests 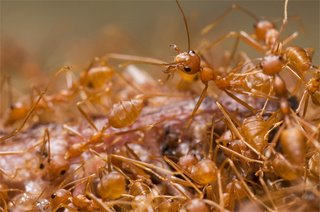 Wonder why this reminds me so much of that sometimes edited out scene. Oecophylla, the pirhanas of the insect kingdom.
No comments:

Placing internationally is GOOD for the ego 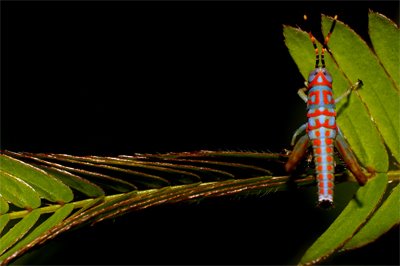 Update:
I'm skipping one post and going on to this one which provides info that made me *very* happy! The added bonus is that you get to know which picture made the finals...

When he still wrote a free and regular column called the Sunday morning photographer, Mike Johnston was one of my favourite reads. One of my utterly favourite column was called "Scenic fatigue". I think I'm going through that sort of fatigue with shooting in general, I get exhausted just looking at my pictures.

Oh, I don't think I'm doing unfocused photography, there is a story to tell (more about the story itself when I feel like telling). Just sometimes I think that theres a huge danger in nature photography that you'll have everything just so and empty it of photography and leave it all biology or worse, prettiness. The interesting subject, rule of thirds, perfect light, colours, sharpness, low grain, selective focus, the little catchlight in the eye, the action/dynamism shot....you know. There are too many conventions/rules in this business. And too many times keeper shots are keepers because the meet an appropriate convention.

How do you break this little problem, cause all of those conventions do have a reason you know? They make things look...good. In a certain way. So I think I'm getting on a mission now, to find images (not necessarily mine), nature photography images that look good while breaking at least one convention... and then see whether I can work through, why the image works....lets see how it goes...

(I'm using this image for criticism, which I believe is ok under the fair use clause of the US copyright act. I've linked the originals and credited the author.)

We'll start with the obvious guy, Mike 'Nick' Nichols. He's a out there 'I dont want to make pretty pictures' nature photographer. This compelling shot was taken as part of his project called 'Brutal kinship' on the nature of the relationships between humans and chimpanzees.

It's not a pretty picture, and some would argue its not even a nature picture. Does it break conventions? Some, you dont see the eyes of the animal, the face is hacked at the chin. (This is probably so its possible to look at the picture without turning away in disgust.) Its a portrait of an animal with no identity, which defies the genre portrait itself.

There's blood in the image and theres no denying the agony in those hands being restrained. The animal frames his own blood as in an act of display; "here, here's my death". There's no attempt however to prettify it, neither to judge the death as needless. The syringes, the tubing both suggest medical intervention in some form. Either an attempt to save the animal or maybe what caused the death in the first place.

The caption tells us its a chimp that died of systemic failure after a vaccine against HIV almost worked on it. It almost saved so many lives but died. Its a matyr's image. Its not an image of an animal, its an image of what happened. Its littered with clues to what might have happened and leaves us to figure it out before the caption reveals it. I think the tension already exists in the image, the justification of the death is ambiguous, and yet this is not an obvious 'animal rights' image. It becomes more so with the caption. But it does not lean so far as to condone the whole extreme animal rights stand of never using animals for research. Its a marvellous walking of the thin line, and in my opinion its why it works.
No comments:

In a hurry, gotta go 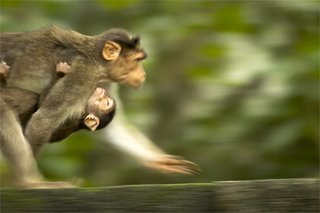 Those of you who've been wondering what I've been upto, sorry. I've to pay attention to a few other things right now, which means I cant really do this. So instead I thought I'd link you to a few other (amateur, whatever that means!) Indian wildlife photographers that I like.

Theres Kalyan Varma whos also a Bangalorean, and he has a few other interesting projects going, which unfortunately dont seem to have taken off that much. The PlanetWildIndia in particular has quite a bit of potential. Imagine being able to use it as a travelogue to find new and interesting places, particularly those that are within reach to shoot in! I suppose there are already lists with that sort of information on them that one could use. It would be nice to get that kind of information/resource list together.

Kalyan's got a couple of friends , who I don't personally know, who're pretty good photographers themselves, I was pretty impressed by Sudhir Shivram. There are others, but what I think distinguishes these guys is their dedication to this stuff despite other day-jobs. There are others, leave a link if you know of any that you think should not be missed.
No comments: 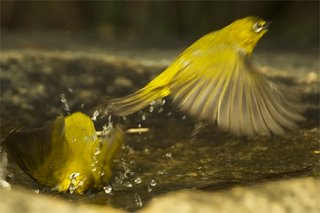 quietly slowly slip by. Everything escapes me.
No comments: