The weekend was good. Like all weekends that are actually spent shooting. Its good to be out again. 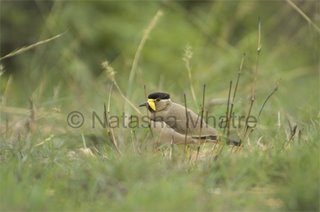 But today was a bad day. I'm easily disturbed but well... See someone wanted to use my pictures for nothing gratis and I said no. The person got pissed off and thought I had no loyalty and so on, and believed for various reasons that I should do this, allow the use of the images free.

What I'm wondering is should anyone? I know for one that my images take work and a LOT of dedication. It takes a certain amount of knowledge, a certain amount of research into my subjects. None of these is a one session shot, each session often takes 4-5 maybe even more hours at a strech, in the 'elements'. Often immobile in uncomfortable positions, or moving continously and cautiously for ages or being some weird kind of contortionist. I love it, but its work. Much more relevantly, the images are worth money, they are actually reasonably valuable or at least my agency thinks so. Why should anyone give away anything unless they feel compelled to? Why should anyone expect this kind of compulsion?

This kind of 'grabbing' is even true of a lot of contests. Even participating in these contests not just winning allows the company sweeping rights over the images. It cant be a good thing for photographers, can it? By many estimates the number of images made in the last few years is orders of magnitude greater than that in say the 90s. There's a flood of images out there, on flickr, blogs, online (penny) stock agencies, theres people giving them away for the asking.
This glut of images makes people believe that images are easy to make and well a dime a dozen But good images are not. It makes it harder for people like me, who are on the fringes of being pros to convince people that 'no, not for free'. I'm sure its made the renumeration for pros come down somewhat. 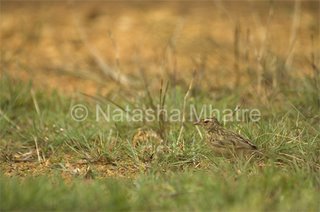 Its even shittier when you're up against people who dont know good images from bad, who wouldnt see quality and craftsmanship if it bit them in the *&%^#$. And then if you're in India and you're a young student, why you're just ripe for exploitation aren't you? Maybe this isn't true, but tell me really if any of you are reading this out there, how much unpaid work have you done lately? Work that doesnt fall within your real responsibilities that you're expected to do anyway, for NOTHING. My guess is if you're a student, a lot....

Think about it a bit, and next time just say 'NO'
No comments: 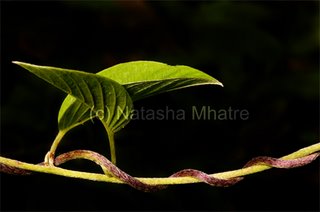 i love the internet and my propensity for tying myself up in knots in it. 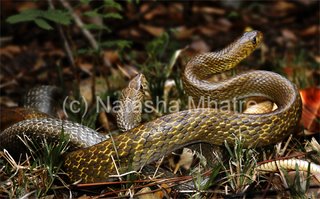 Hmm, I had found me some unhatched lacewing eggs, upon which I kept a very close eye. This ere eye hoped to catch the hatching and to not miss the young ones as I had with the the last series of eggs. (check prev posts). Here's what an adult looks like. 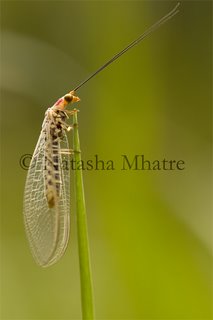 Pretty faerielike huh? Well they're a little like dragonflies but to the good biologist me what sets them apart is the fact that some of them have ears....on their wings!

Well, so for some reason I was expecting little baby lacewings to pop out of these eggs... small versions of big momma/daddy you know? Quite a surprise when I got these hairy creatures instead! 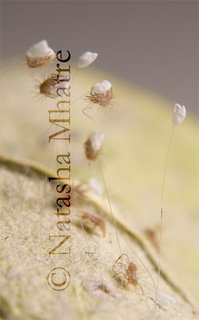 olometabolous insects....these lacewing larvae as I had conveniently forgotten are well known for their voracious appetites for many small creatures, mosquitoes, their larvae, aphids, etc. They are often used in biological pest control programmes for this reason, lacewing eggs are actually sold to you so you can 'spread them throughout your fields or gardens' to acheive maximum pest control.

The larvae eventually pupate and voila you have an adult...and no I havent found a lacewing pupa just yet !
3 comments: 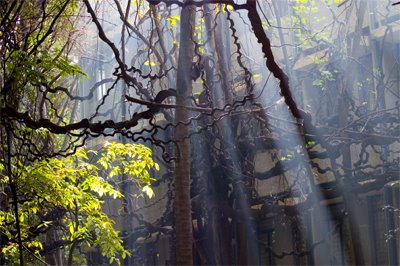 There are rewards when you wake up early in the morning. The vines are lianas (woody creepers) brought here to ces from the western ghats, planted years ago. They mesmerise everyone who sees them the first time. Its like a breath from a rainforest somewhere hit the city of bangalore. The building at the back is my department.


The reason I picked this image is that its about lines, it verges on a graphic version of a line photograph. And yet its not.

Here are a few examples of graphic line images. This one uses the classic quality of repitition.
repitition

Heres another, uses form, depth and curves. (And, off course, some beauiful tonality)
curves

You'll notice that these images have very simple geometries, something that makes many line images intuitive and quick to 'grasp'. You see the image, finding the form, are led around the image exactly as the photographers eye saw it.

Some photographs explore the line as a twisty concept...
twisted

Few explore, straight and twisty lines in a confused ungeometric pattern. Which is why i like that picture....
No comments:

I need a go ahead for a project and until that happens I'm slacking a little on shooting. Well that and its hot, and I am killing myself learning how to swim well....Summers lovely.

Animals live in some kind of environment and sometimes you want to depict that relationship in an image. Often however the problem is that the elements of the that environment, in which the animals is situated are much larger than the animal itself.

And any image that has both in the same shot if its made with a conventional mid-range to long tele is going the compress the tiny animal against a grand huge background. this your standard too tiny in the frame animal. mind you, that you can choose to show only some part of that environment and let the rest suggest itself as 'more of the same'. Here's an example. 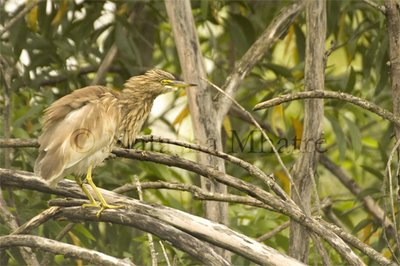 Fairly informative. Pond herons roost on dead trees. But it will by its very nature leave out something. for instance that this particular dead tree is next to a pond. If you try and include the pond in the pict by zooming out. well the heron become smaller....and the pond becomes the picture....

So if you want a landscape feel to your image, want to give a feel of the WHOLE area, and yet want to have your animals at a size thats noticable, try a wide.

Whats a wide allows you to do, is create a perspective that the human eye does not normally have. It makes objects closer to it much larger than those further away.

(link to get you to understand this.)

so now if you can manage to get close to your animal and have all your landscape elements neatly organised behind the animal, voila animal elements all similar sizes managing equal amounts of attention..... 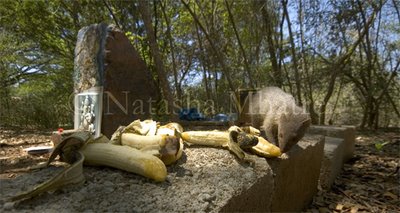 easier said than done, lets see you get a couple of inches from this mongooses nose!
No comments:

Email ThisBlogThis!Share to TwitterShare to FacebookShare to Pinterest
Labels: how to, nature, photography, wildlife

When you build an arch, there’s a stone in the middle. If you take this central stone out the whole arch collapses. And it’s called the keystone. Ecologists have borrowed the term to describe a species that is ‘key’ to an ecosystem, if you take it out the whole system collapses. 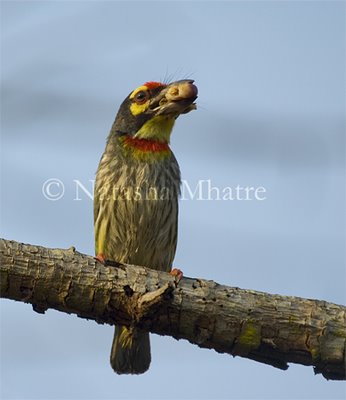 There’s a lot of ways you could be a keystone species, produce a lot of food for instance, or produce food in a season where everything else doesn’t. Maybe all the energy in the system goes through this species at some point, and if you remove it there are two separate entities with no flow between them...producers one end, eaters the other. This is called a wasp waist system; the keystone species would be the one at the waist.

Fig trees are thought of as a keystone species. And sometime you can see why. They produce a LOT of food and often different trees will bloom and fruit at asynchronously, keeping food available to a system. There are usually a huge number of animals that will come to the smells of ripening fig fruits. Some of them will be young boys and girls on their way from school, off course! 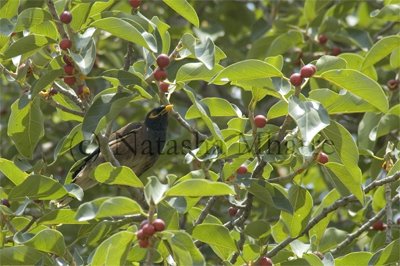 We rarely notice figs when they’re not ripe however, which is kind of funny because a lot of other creatures do and they are attracted to them. Figs have another story going, one of co-evolution. The fig is actually a structure called a syconium and its flowers are enclosed inside it. For these flowers to be pollinated, a pollinator must get inside the fig. Here’s where the fig wasps come into the story. A female wasp finds a receptive fig digs into it, she then pollinates some flowers (in some species seemingly intentionally, in others not), after or along with this she lays her eggs in some of the flowers. And then dies. Several wasps may lay in a single fig. Once the next generation of wasps is born, the females mate with the males, the males dig an exit and the females fly off looking for the next fig.

(Dont have a pic of the pollinator yet, coming soon) 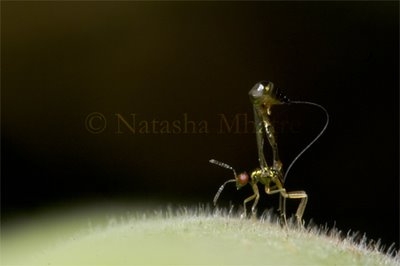 But that isnt it, there are others in the system, other wasps the gallers. These guys are in some ways the cheats of the system. They lay their eggs from the outside inducing galls for their larvae to eat. The larvae of some even eat the larvae of those that came before. Thats a galler laying eggs.

Off course the gallers arent all shiny happy people, because right behind that lovely fig ripe for the laying lurks the big bad.........ANT. Red weaver ants, those big bad evil creatures that will shy from attacking nothing, wait for these wasps (pollinators and gallers) to eat them. 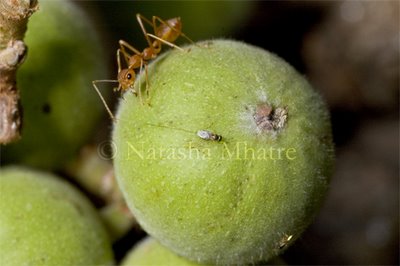 They get them too sometime, these little flitty things. Heres two ants fighting over who gets to keep the wasp. 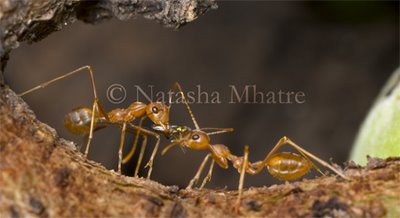 So thats the fig wasp story, gleaned from the comprehensive presentation of Mahua and Yuvraj at CES, IISc.