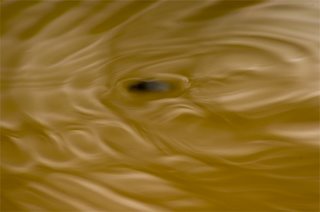 Ever noticed these black beetles in ponds when it rains, they seem to be calm and then suddenly as you approach them they go crazy. Skittering about swimming fast like madcaps? That behaviour has earned them the name Whirly-gig beetles.

They're aqautic for their entire life, eggs are laid on submerged plants. Larvae live underwater and predate on mosquito larvae making them great pest control agents. The adults are also predaceous and usually swim on the surface When required they can dive like many aquatic insects with air bubbles trapped between wings for respiration. What they seem to be most studied for is aggregation, signalling and predator response. They release chemicals when disturbed which alert the others in an aggregation.

The coolest thing about them in my opinion however is that they're eyes are split. The lower half of both eyes are adapted for underwater vision and the upper half for vision in the air!

Some of those fluid mech / engineering types have also done some work on their swimming patterns and the waves they generate. So maybe the above image is interesting to them?
2 comments: 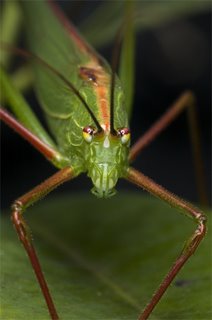 I work on crickets and when i tell people about one of the things that always gets them is that crickets have ears on their legs. Look just under the leg joint in the bushcricket picture, can you see that slightly inflated region? Thats the ear (well sort of, it leads to the ear, thats a tympanal slit).

Insects have ears, literally, all over. They've evolved independantly among insects almost a dozen times over. They're on legs, abdomens, and they're on wings! In the neuropterans, ie lacewings, like the one in the picture, the ears are on the wings!


Well, mosquitoes and bees hear with their antennae. Actually, if I have it right, they hear in the near-field, so they detect particle motion not pressure, unlike the other ears I'm talking about. The resolution those systems manage is so great that they apparently can pick up even motion at even angstrom scales! Thats pretty impressive, and possibly almost on the absolute borderline of physical possibility.

The other weird ear in the insect world belongs to mantises, they have a single ear. Now if you remember your basic physics, sound is scalar and does not have directional cues. So to tell where sound comes from animals have evolved two ears and several physical and computational tricks. But this hinges on having more than a single ear, which the mantises dont have. Why is that? 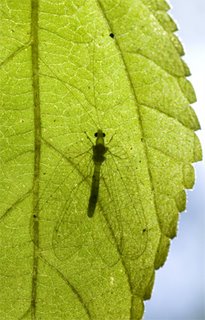 The thing about ears in insects is that they seem to be easy to build. Ingredient one : you need an air space which insects have everywhere because of their tracheal breathing tubes.

Ingredient two and three: receptors and neurons. First you need something to sense the vibrations of the tympanic membrane you strung across this empty space. Then some neurons to carry these signals away to the 'brain'.

And those are everywhere in insects as well. See they (actually all of us) have these receptors called proprioceptors that detect mechanical stimuli. They're meant largely to figure out things like ok, legs bending now, and now the wings out, theres x amount of resistance on leg 2 and so on. To provide feedback to the brain on how well its commands to the motor system are being carried out. Now these have neurons connecting them up to some ganglion and then to a higher 'brain'. So if you can rearrange your proprioceptors to detect tympanal vibrations and your neurons to carry the signals, voila, you have a ear!

Actually why spend all that energy on making a ear though? Predator avoidance comes the pat reply, particularly, BATS!

You know this cool thing I read about this proprioception stuff, in one of the first insect walking robots they made, they didnt think about the interaction between the robot and the surface it was to walk on. And there was no feedback of the kind proprioceptors provide. If memory serves, that robot tore itself apart as it walked!
2 comments:

That would be us! Considering the prices I guess I would do this to me gear seller?
No comments: 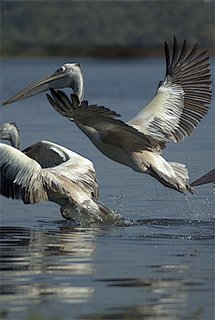 Most of the pictures on my website and on my blog here are from IISc. But I do go out you know. Well ok only very rarely and then with some coaxing...I'm lazy ok? I spent some time last winter going to this lake on the outskirts of Bangalore in a village called Medhalli. A few hundred Spot billed Pelicans were over-wintering there. Neato birds which by the way are endangered according to the Red list. 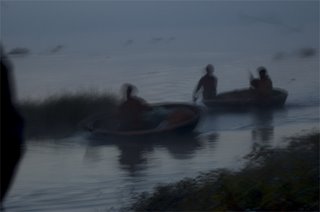 There were, off course, also fisherman on the same lake. And they didnt like the Pelicans since the birds ate up a lot of fish. They would try all kinds of tricks to keep the birds away, firework rockets, noise etc. With limited success. The birds stayed there all winter long, didnt fish too close to the banks and the fishing hut except early in the morning.

Here are some pictures, the first in the mid-afternoon, extremely contrasty and stopped down to get that nice blue of the water. The pictures of the fishermen in their coracles, the circular cane boat was shot before dawn. 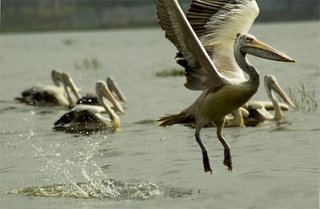 And the Pelican picture next was shot after dawn early in the day when the light was overcast and soft. (which for some reason reminds me of this Stieglitz shot of his wife, the painter Georgia O'Keefe. I guess just the upraised 'arms'.) 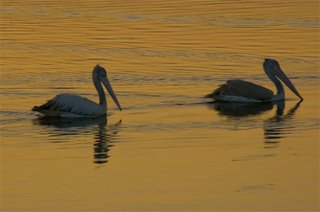 The last one off course was at day's end, I love those warm colours mixing up with a blue mixed in into the ripples. The pelicans are there just for weight yeah? :)
No comments: 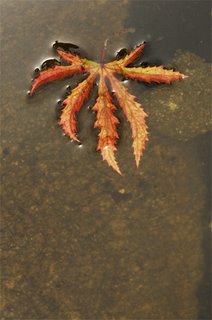 No I dont think so. And I havent moved to Canada either...But what it does mean is it's finally raining here.
No comments:

Email ThisBlogThis!Share to TwitterShare to FacebookShare to Pinterest
Labels: plant 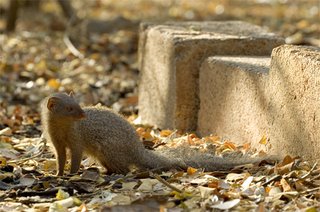 How did I miss this one? I fell in love with a family of mongooses and obsessed over them for almost 2 months. This is one of a few hundred shots. After I tore myself from them, apparently mommy had some more kids. The last they were seen, (unfortunately a long time ago), mom had 6(!) teeny ones in tow!
No comments:

Email ThisBlogThis!Share to TwitterShare to FacebookShare to Pinterest
Labels: animals 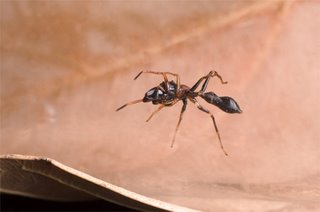 Here's a little visual puzzle to keep you busy. How did I take that picture. Hint: I'm a wicked witch!

And yes thats a spider, not an ant. Its an ant mimicking spider. I think that the ant below may be the model, I'm not sure though. They looked similar, but when I look closely the ant has an orange head the spidey a black one....so dunno. 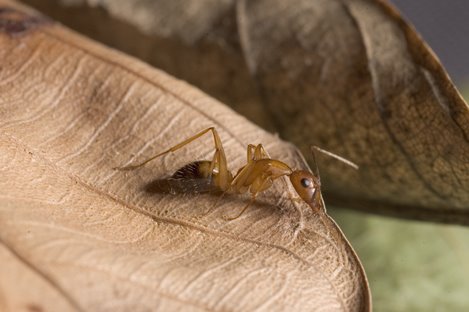 Dying for someone else's cause? 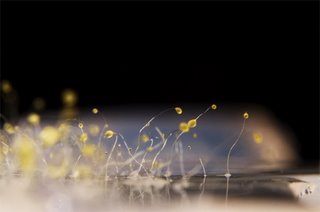 The one thing that every organism is expected to do is try and reproduce. When you see an organism give its life up so someone else might, it begs the question, why? Social animals, particularly the uber-social ones like bees and ants, have been the subject of the much research for this reason.

There is yet another organism that drawn attention for this reason. Soil myxamoebae are not too charismatic. The fruiting bodies (that you see in the pictures) that they form in one phase of their life-cycle look much like fungal sporangia. But they're quite different. A single fruiting body is made of many individual soil myxamoebae which have aggregated together. The stalk is made of dead amoebae and the 'fruit' on the top are living ones. The living ones will become spores and be dispersed and so the dead have died for anothers cause. A recent paper suggests that in some slime moulds there might be some interesting kin selection going on. Carl Zimmer the author of At the water's edges blogs here and has written a very nice post about them.

The other interesting angle to Dictyostelium discoidieum is that the individuals here are single celled organisms. And they come together to form multicellular super-organisms! Some believe that they may hold some of the clues to the evolution of multicellularity.

The pictures were taken in this lab which works on them in IISc.
No comments: 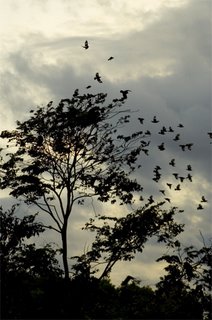 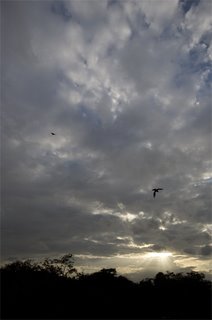 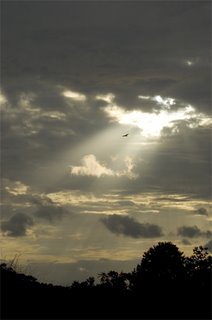 The birds that roost in IISc come back to bed at the end of a day. Most of the birds that bless us at night are common mynas and crows. They forage elsewhere in the day and leave their post-digestion remains all over our road, vehicles and occasionally heads.
No comments:

I think I will stick to natural history/biology from now on?

Largely because I think he's right, despite the repeated use of the f-word.
No comments:

Email ThisBlogThis!Share to TwitterShare to FacebookShare to Pinterest
Labels: blogs 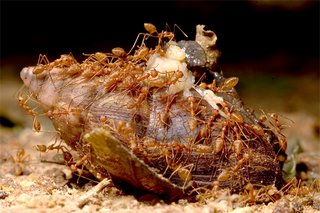 I've been reading about groups of animals recently and about socials animals and the distinctions that can be drawn between them. The definition is loose and while its clear that a family group does not make a social animal, its not clear really on other things. For instance are giant fruit bats roosting together social animals? I guess not, there isn't much 'cooperation' going on there....

Which isnt to say social animals are all cooperation and no conflict. Read this by a professor at my dept. which explores both aspects among social animals. Lee Dugatkin wrote another book, its a readable book even a good one. But his repetition of his religious beliefs in it and reasonably open admission of his political positions sorta bugged me. Theres no need for it to be in the book, or none that I could see. I believescience is incompatible with religion, I can see how people can do it and do do it, see how we often compartmentalize our lives. But I don't have to like it and don't think it entirely consistent.

But it did get me thinking about somethings. One thing that often slips my mind sometimes: that humans are social animals (I always wonder why people cant just keep to themselves!). To get back to the point: One of the most dismissed ideas in evolutionary biology is perhaps group selection. And yet, according to Dugatkin, there is some theoretical evidence that suggests under very very special conditions it might well be a significant driving force in the evolution of cooperation. One of the necessary (but not sufficient) conditions is great between group selection and low within group selection. 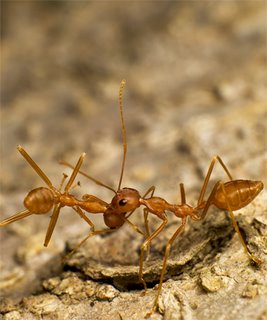 Thinking out loud here, I wonder if human groups are coming to this now. Not necessarily at an evolutionary time scale, but socially, we're so tribal. Look at all the fights between religious groups today, intense cooperation within groups and intense conflict between. Its a bit like ants biting the heads off each other if they come from different nests.
3 comments: 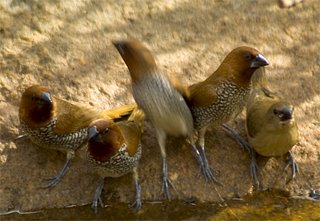 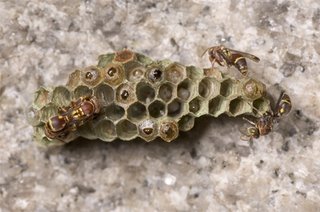 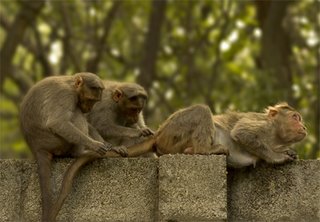 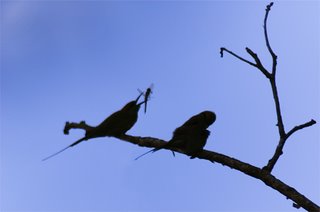 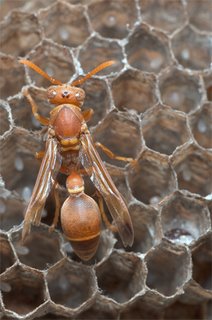 A lot of folks saw me shooting this nest of common mynas this friday. Hope they find their way to this page. Click on the images for larger versions.The rest of the weekend was spent not getting very good pictures, and picking oh maybe a hundred of the guys in the last picture off my pants. 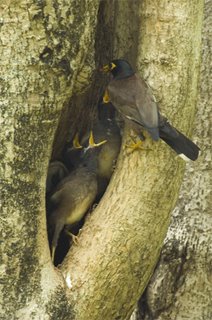 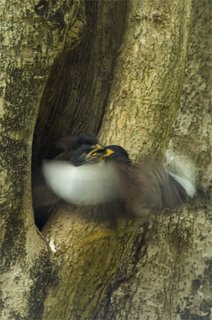 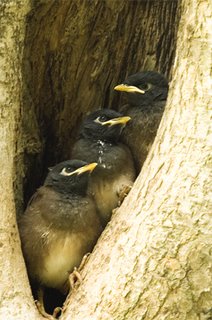 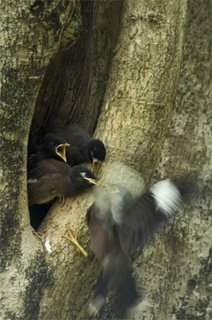 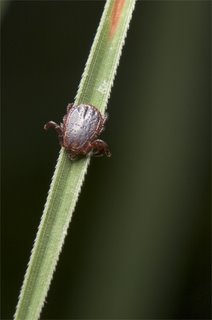 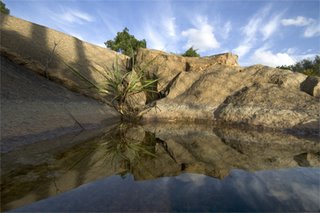 And why I ask 'reality'? Whats that?

Off course you know how this was made. Homework.
No comments: