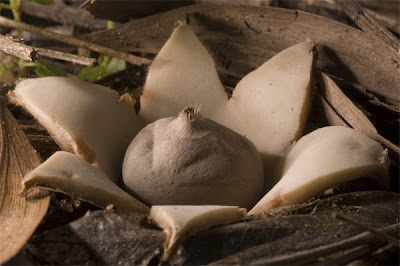 Earthstars are fungi, like the mushrooms I'd posted about before. But they are much more interesting. It's all in their way of spreading their seed. Many plants and by extension fungi I suppose have a bit of a problem. They can't move. So when they have children (seeds for plants, spores for fungi) they need to figure out how to get them far away. There are two basic reasons why they need to do this. One is if the seeds stay and germinate close to the parent, they will compete with one another for the same nutrients, sun and water. Leading to a direct conflict between parent and offspring, not a good idea for either in a direct sense.

And in an indirect sense, since they are connected genetically, whats bad for the seed is bad for the parent. The other disadvantage I alluded to arises from this indirect component. Around each parent at least with plants, there is something called a seed-shadow. This is an area where due to the competitively advantaged larger/older plant, a smaller starting out seed is unlikely to do well.

So plants and fungi try and find ways to propel their seed as far from themselves as possible. Earthstars have a picturesque way of doing it. Take a look at this explanation and this video. And then go find some of your own to poke! I had fun with this one!

I have a picture os an earth star thdat dis black and brown.