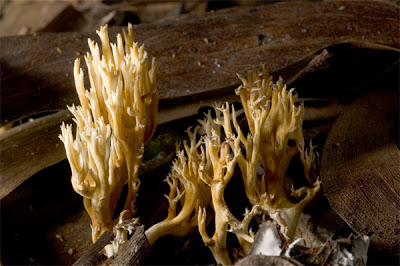 No, that is not coral and it does not explain why this blog has not been updated recently. Much as I would like it, I haven't been out vacationing next to some lovely blue water, sun on my back. I spent a Sunday afternoon walking around Jubilee park, followed by a cloud of eager and seemingly never sated mosquitoes. I felt like the gnu in Animal crackers.

But what kept me there through the better part of the afternoon were these. They're fungi, mushrooms, fungi with macroscopic fruiting bodies. It's the right season for them, everything is cold wet and damp, perfect for any fungus. They crossed the water to land boundary somewhere around the Silurian, 450 million years ago, right after the plants. And yet they have not completely shaken themselves of the water habit. 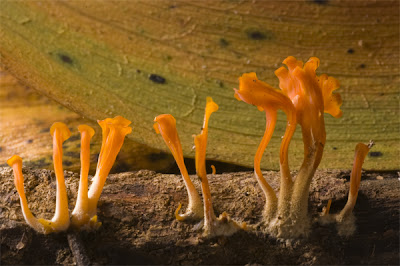 Mushrooms seem to vary quite wildly, and occupy varied groups in the fungi. Their forms vary quite a bit from the first photographed mushroom which seems to belong to a group called Coral fungi to the last photograph which is a Bracket fungus. The amazing thing about these is that I found them all in the space of a single afternoon in that tiny park. I would find one more and then think 'ok, there can't be more' and there it was staring me in the face! There are more, which I did not get decent photographs of and others which I have seen elsewhere on campus. It's a little difficult for me to make an actual species count, since theres wide variation in a mushroom, in stalk length and cap size. It would need a proper mycologist. 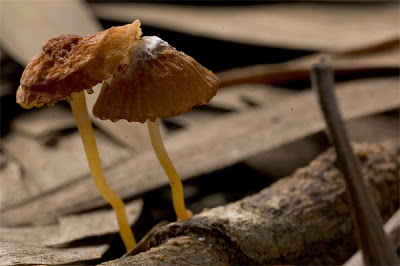 Although I did find this intriguing site from which one might try and key these down to Order or at least family. I'll be giving it a try later and will post provisional names at some point. If you wanna give it a go, please do and let me know your results. I'll try and find a mycologist eventually to do a more definitive study o 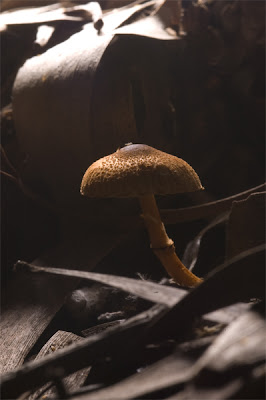 Until then enjoy the images! 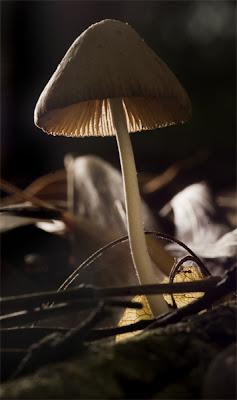 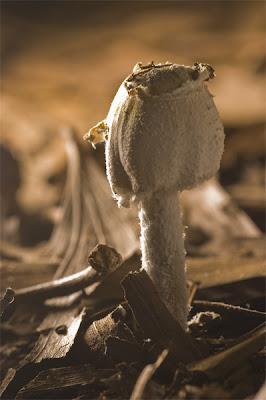 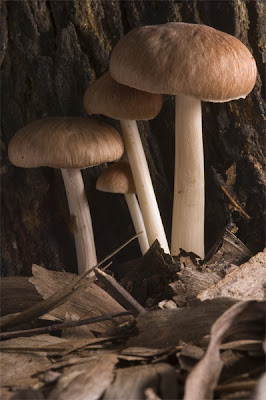 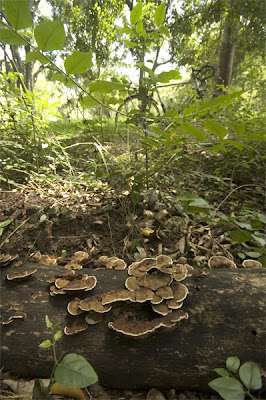 Found your blog today and enjoyed the snaps a lot!

Thanks CV and Harsha...

I guess thats the beauty of monsoon, it brings out all the hidden things for a very short time. I wait for these fungi & mushrooms in monsoon. Beautiful pictures! Cheers!

What are those pretty looking orange sprouts? (3rd in the last set). They don't look like normal mushrooms.