Fireflies: the making of a shot

The path in Jubilee park by night 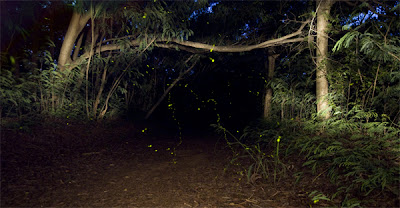 When I set out to do a fireflies in the landscape shot, it was quite late in the season. The erratic rain had got the worst of the population. And this meagre shot was all I could come up with. I waited while fireflies flitted around in the frame to let them show up against the dark background. And then later in the quite long exposure, I light-painted the trees in the back hoping that I wasn't washing out any of the firefly trails. I didn't mostly and it was fine, but the method was a little hit or miss. Besides, I did not like the background at all. The tree frame did not look as good as I wanted.
By day: windblown and bent tree in the Mainlawns in the monsoon 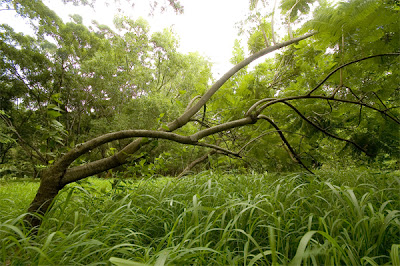 So I switched to another place where from a previous daytime shot, I knew I would love the background, and a day and night diptych appealed to me. So I took my tripod, and headed to my favourite windblown tree in the Mainlawns. By now, much of the season was over, and there were darn few fireflies to flit about in my frame. I wanted to make sure if one did oblige, that I would not loose it in the light-painting part of the shot. With the greater number of reflecting surfaces, the grass stalks up in the front of the image, the light would have to be balanced pretty closely. I thought wouldn't it help too much that the colours of the firefly flash and the grass are similar. Cars cruising along the side of the road that turned up around the horizon were not much help either (which was why I hadn't begun on this shot here). I wasn't sure I wanted to risk it, so I took a shot without exposing for the tree, just the dark and a firefly trail in it.

And then I shot for the tree separately, this time like before, waiting till the end of the exposure to light paint (you know, just in case). As it turned out, a firefly (which is actually a beetle) made a small sortie and I got a little trail to the right and another streak in the upper left. Not enough, but some satisfaction. And anyway, I had my backup plan, the earlier trail. All I had to was sandwich the two shots to get what I was after! Fireflies blinking love signals to each other in the lush monsoon enriched Mainlawns!

By night: windblown and bent tree in the Mainlawns in the monsoon 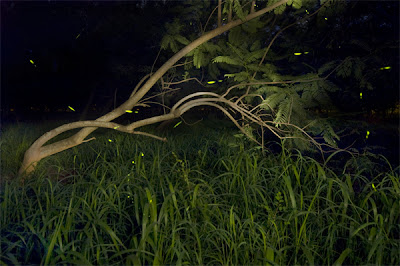 I don't know if you've seen Gergory Crewdson's series of fireflies, but they are very cool, I htink. I posted on them a while back and will leave the link as it linkes to the gallery where you can check out the series. He has now published a book of the project too. Here is the link to my post:
http://politicstheoryphotography.blogspot.com/
2007/01/fireflies.html

I hope all is well with you! Jim

Hi Jim, yes I had seen that post and his images. They were quite intriguing and magical. Quite unlike his other work too. I was a bit surprised when you said he's made a book, I amn't sure there's enough there to support an entire book, guess thats a personal judgement.

I was actually about a year into my own firefly 'project'. (I haven't uploaded many of those images here.) And I wondered whether I was going to be completely scooped when I first read your post. As it turned out we have, at least visually, a different approach to the subject, so I carried merrily on.

This post from John Moran came a bit closer to what I've tried here, http://www.johnmoranphoto.com/riverofdreams.html

Off course Crewdson & I have real fireflies!

Things are well, I'm just at a very hectic phase. But its good.

I wish the same for you.