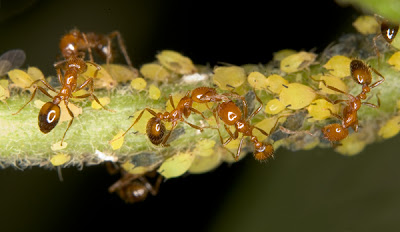 Aphids are perhaps most famous for being the poster children of mutualism. To be able to cooperate with another species is quite an achievement. Particularly in the eyes of humans, a species whose own history of cooperation is extremely checkered. Then to stably maintain that cooperation over evolutionary time-scales where we fail often, even over the shorter course of human history. But then the clock ticks over slowly at the level of genetic evolution. Meme time is a faster beast.

Another ant, probably not another aphid 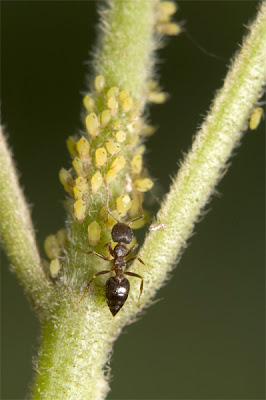 Apart from being cattle to their social arthropod herders, aphids are interesting in other ways. Ways that relate again to time, ecological time. Ways that relate to the rhythms of days, months and years. Aphids feed on plant sap. They used specialized mouth parts to dig into the living phloem of plants to extract sugar and other nutrients from the plant. They are, in a way, plant parasites. Gardeners will differ with my dilly-dallying and pull out the aggressive pesticides.

Aphids feeding on bamboo (click on image to enlarge) 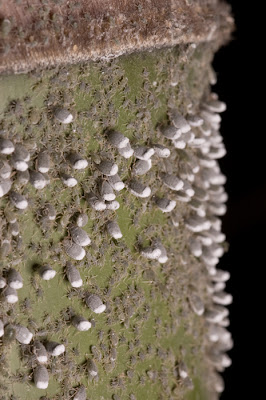 Many species are monophagous, they can eat only a single species. In the dispersal stage they find the plants they eat using chemical cues. They can probably infest a plant only at certain stages in it's life cycle and must find plants that are appropriate to them. Such resources are often rare, ephemeral and short-lived. To make the most of the possibly short-lived windfall, these insects must expand rapidly in number.

Aphids speed up reproduction time in a truly spectacular way. They reproduce parthenogenetically. No mating. They can mate and do under certain circumstances, but they can switch to just making perfect copies of themselves. You might ask ok, but just how much time does an aphid shave off by skipping the finding-a-mate stage? Admittedly only a little.

The truly large time saving comes from a crazy trick called the telescoping of generations. Female aphids give birth to parthenogenetically produced female aphids who are already pregnant with the next generation. That amounts to a larger reduction of reproduction time. And it's what allows them to infest a plant in your garden in the short span of a few days. It's also what might allow them to develop quick resistance to the pesticides gardeners and farmers use. A granddaughter and daughter is exposed to everything a female aphid is exposed to and selective pressures needn't work independently on each generation, which I think should speed up the process of developing resistance.

A ladybird feeds on bamboo aphids 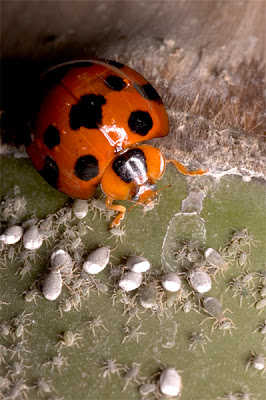 Off course, such abundance does not go unnoticed in the competitive world out there. Aphids have their predators, ladybirds most notable of all, lacewing larvae, hoverfly, wasps and many other tiny carnivores. Many of these predators are believed to be attracted by plants, who produce volatile chemical cues in response to aphid attack. All these wonderful weapons deployed in a war for survival in a system in which the upper hand probably changes often and in innovative ways.

Anonymous said...
This comment has been removed by a blog administrator.
8:00 am