IISc lost the hovering diving pied kingfisher because water bodies disappeared a while back, one among many others 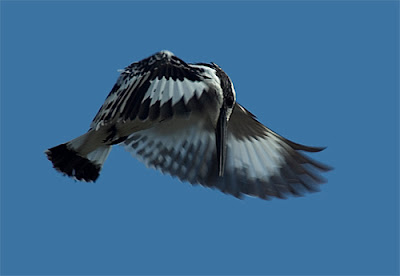 I don't usually link articles but this one written by Clive Thompson on Glenn Albrecht's work is irresistable. An excerpt:
"... scores of Australians described their deep, wrenching sense of loss as they watch the landscape around them change. Familiar plants don't grow any more. Gardens won't take. Birds are gone. "They no longer feel like they know the place they've lived for decades," he says.
...
They're suffering symptoms eerily similar to those of indigenous populations that are forcibly removed from their traditional homelands. But nobody is being relocated; they haven't moved anywhere. It's just that the familiar markers of their area, the physical and sensory signals that define home, are vanishing. Their environment is moving away from them, and they miss it terribly."

Great photograph. I am a 'bird person' so it is 'good' to see that so many other people are witnessing the disappearance of the things they love and making a statement. I am keen to learn from people such as yourself about the impact of such loss on your sense of place and well being.

Hi Glenn, its great to hear from you directly. Solastalgia is a lovely idea and encapsulates a very potent feeling.

I live as a student on a campus which is right now undergoing large scale construction activity.

There have been other large changes over the years that I have lived here as well as before. The exact reasons for which aren't clear. They seem to be tied to both climate change (we had several (three years?) of failed monsoons) and also human activity (construction, dumping).

This has caused a lot of changes, apart from bird disappearing. I work on crickets who make sterotyped and identifiable mating calls at night. I've noticed the sound landscape of the place change and become dramatically less diverse over the last eight years. I'm reasonably sure that we've lost quite a few animals over this time, the night is quieter.

The actual sensation such change evokes is harder to pin down. One thing that comes to mind is that there is a hole in my mental representation of places. Something protective refuses to allow me to think about the worst affected places. I actively avoid visiting them.

I'll try and convert this into a better articulated post of some sort and send you a mail.