Seperating the men from the boys: variance 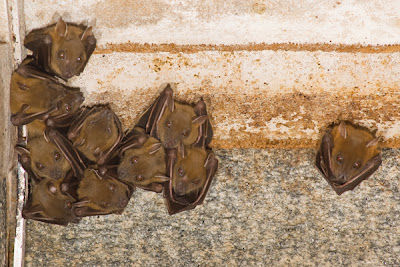 Get ready for a lot of speculation. I've blogged about the harems of these bat's before. This post is just to give you a feel for what variance is like (and to show you the pictures) . I looked under the eaves of the Physics and IPC departments. I found a total of three harems, the top male, in the photograph above monopolised 10 females. (Based on a bat guy's know-how I'm guessing the bat on the outside is a male, the ones in the group are all females. You do see a few hints of dimorphism between the two.) The second largest harem had 7 females, and the smallest, in the next photograph had 3. There were three pairs and four loners. 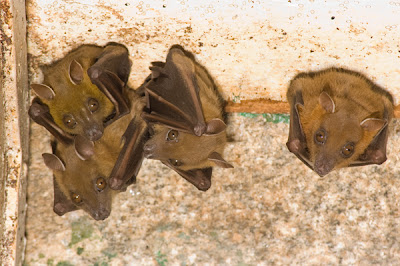 If my conjecture is right, (and seeing how it skews the sex ratio quite strongly towards females it may not be), then three males between them managed to have primary sexual access to about 90 percent of the female population (20 of 23)!

Biologists like to call this reproductive skew, the notion that reproductive success is spread across a population in a skewed manner, allowing a few individuals to produce the most offspring. On average each male should have 2.3 females, paired up with him here (23 females, 10 males). But some males have nearly 5 times that number and others have none!

A pair (Can you see the differences between them? My guess, right side one's a male) 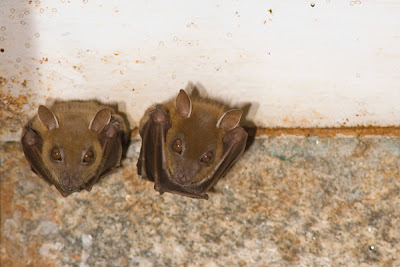 There are much wilder skews in reproduction in other animals, think about social insects. Honeybees, for instance, in which the queen bee is the sole reproducing female among thousands and thousands of sterile female bees. Biologists have used kin selection theory to explain such behaviour, where some animals willing give up mating rights to help kin, because they receive sufficient indirect genetic benefits through them to make up their losses. 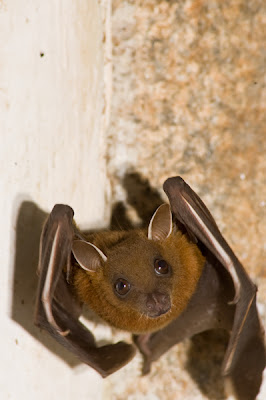 In many other systems, however, such as this and other polygamy systems, this won't work. The relatedness between these females is likely to be low. So what's going on? Reproductive skew theory is a system of models that attempt to add ecological and social factors to kin selection kind of ideas within some kind of formal quantitative frame-work. In this system, among the bats, the key driver appears to be access to a resource that makes all the difference, a roost. The difference between boom and bust.

Anecdotally, two things. The largest harems in IISc have always been in the same roost. So there seems to be something to that idea, good roost, high attractiveness . Also, as you would have noticed I shot these images using flashes. Now the bright lights in the roost were not appreciated and were probably stressful and disturbing. Now these bats can fly in the day, they just don't from fear of predation. There I was however, simulating it to an extent.

But none of the animals in the harem situation moved, neither did the pairs. The only bat that instantly took off and moved to another roost was the solo bat. The picture above is him taking off. I suppose one could read something interesting into it, the roost may not have been so good and so the male lost little in moving on. The other males, with the harems, however, stood to loose both females and the roost and well the hung on for all their fear and tribulations. For which I'm grateful, off course! 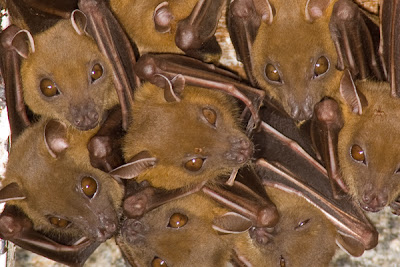 PS: I did warn you this was going to be speculative.

Thanks, hope you keep visiting.